Where is the ‘Red Land’ region, as in the Red Land Little League champs? 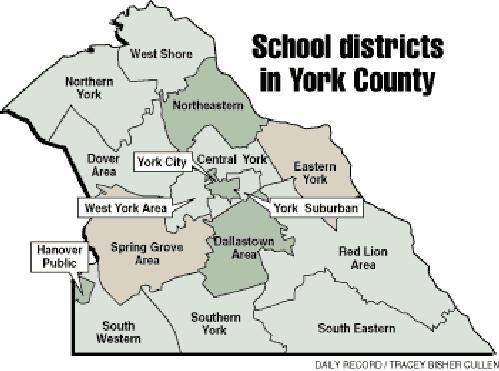 In history, Red Land, Redland or Redlands, home of the Little League World Series U.S. champs, has been viewed as residing in York County’s northern tip, loosely following the lines of the West Shore School District. Motorists on Interstate 83 might know this area as the  Newberrytown and Valley Green exits, and they climb from its valleys when crossing Reeser’s Summit.  Notice the reddish color of stone houses and barns in this region, made from the red sandstone prevalent there in ‘Red’ Land. Also of interest: Where does the ‘Red’ in Red Land Little League come from? Part I.

A guy I was with this weekend wondered about the location of Red Land, as in the home plate of the championship Red Land Little League team.

I wasn’t surprised by the question.

So the mountains, hills and valleys of the Red Land area of York County aren’t known to some people in the York area.

So we’ll pose and try to answer 7 questions about the region that has spawned the champs, starting with:

1. Where is ‘Red Land,’ as in the Red Land Little League champs?

A. The short answer is in and around Lewisberry, in the middle of the Red Land Valley. A longer answer is that Red Land more or less follows the borders of the West Shore School District, covering  Lewisberry, Newberrytown, an area known as Etters and other places in the Red Land and Fishing Creek Valleys.

George Prowell goes right to this northern tier area of York County on Page 2 of his “History of York County, Pa.” in pointing out that a spur of South Mountain – actually the northern tip of the Blue Ridge Mountains – runs across Fairview Township and ends at the Susquehanna.

“Enclosed within the different smaller ridges are the fertile Redlands and Fishing Creek Valleys, composed of the new red sandstone and red shale formations,” he wrote in his 1907 history.

This does not mean that the red sandstone that gives the region its name isn’t found elsewhere, and other places in York County can legitimately claim the name. And some do.

Note the handwritten “2s” on the map at the bottom published in Prowell designating regions where the red stone can be found.

But Red Land is commonly viewed as the area covered in the northern angle of triangle-shaped York County.

2. Who settled in Red Land?

A. Generally, it was the English, particularly members of the Society of Friends or Quakers.

They built two meetinghouses in the Red Land region – in Newberrytown (a private residence) and near Lewisberry (standing, but only occasionally open).

A third meetinghouse went up closer to Dillsburg, known as the Warrington Meetinghouse.

3. Are there any other defining features of Red Land?

A. The Big Conewago Creek separates this region from the rest of York County, providing a  kind of cultural barrier.

Those in the Red Land area historically connected with Harrisburg. They sold their goods there. The shopped there.

Those south of the creek more often associate with Baltimore and points south.

4. What well-known people have come from Red Land?

A. Greg Gross, formerly of the Philadelphia Phillies, was an accomplished Major League baseball player.

A Nobel Prize winner came from Goldsboro. That scientist, J. Michael Bishop, won the prize in 1989 for his work on explaining how malignant tumors develop.

Also, Ellis Lewis, a Lewis from the founding family from Lewisberry, served as a state Supreme Court justice.

5. How does the name Etters figure into Red Land?

A. Etters is synonymous with Goldsboro and the region around that borough. It’s a post office address that borrowed its name from a tavern owner. Elsewhere in York County, York New Salem (New Salem borough) and Codorus (Jefferson borough) are two other places that do this.

6. Silver Lake, a well-known former mill pond and now a desirable lakefront community, is in the Red Land Valley. How do you square Silver Lake and Red Land?

A.  The lake got its name because of the blue color of clay at its edges gave the lake a silver appearance, according to a York Daily Record story.

7. How can you ID the various regions of York County?

A. Historian Jim Rudisill says think Neapolitan ice cream – the Redlands area would represent strawberry. Here’s a summary from a past story with Rudisill’s explanation:

In the southeastern part, a stone of a medium brown color was used. In the Codorus Valley, builders used white limestone. The stone of choice in the county’s northern part was dark, reddish sandstone, hence its name, Redlands.

Notice the “2s” on the map showing the red sandstone areas of York County. Red Land is normally associated with the mountains, hills and valleys of York County’s northern angle, the northernmost “2” on this map. The “2s” were written by a past publisher of this map, found in Prowell’s history.