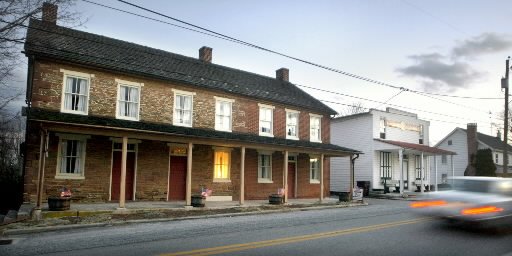 Gen. Jubal Early, division commander of Confederate troops invading York in June 1863, stayed in this house in Big Mount, Paradise Township. After his night’s stay in this still-standing, privately owned structure at the corner of Canal and Big Mount Road, Early headed to a surrendered York for a two-day occupation before Robert E. Lee recalled him to the vicinity a Gettysburg, where a battle was brewing. Background post: E-mailer queries about Confederate invasion.

Jubal Early’s overnight stay at a York County home produced an amusing incident in the otherwise deadly serious Confederate invasion of York County.
When Early returned to the Big Mount home after visiting John B. Gordon in nearby Farmers, he found the widow Zinn had reserved supper for him.
Sitting with the woman and her teenage daughter, he enjoyed a fare of 15 to 20 Pennsylvania German dishes, particularly fresh summer vegetables.
The rest, from “East of Gettysburg”:

The dinner conversation touched on several topics.
“Well, is Stonewall Jackson dead, sure enough?” the woman asked.
“Unfortunately, madam, he is dead.”
Some of the Yankees believed he wasn’t dead, the woman said. As Early later wrote, the woman related “some of em said he was dead as h-n sh-t.”
The daughter did not blush, and Early conjectured she was accustomed to such earthy language.
By this time, some of the invaders had concluded that they preferred the gentile manner of Southern women to the coarse mouths of women north of the Mason-Dixon Line.