Read all about The Howling Hellians of Dogtown School: Linked in with neat York County history stuff, March 9, 2012 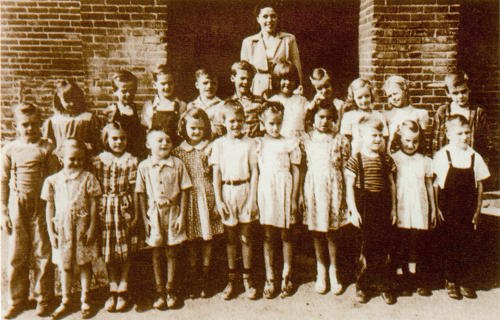 Former residents of Dogtown shared their memories in a recent Weekly Record story on that West York/West Manchester Township area in and around the old Highland Park. But one story not captured there is told by Dave Gulden on his blog. Old York Times. Let’s just say he tells about the time a teacher locked his misbehaving students in the Dogtown School, actually known as Highland Park School. The headline will explain it for now: The Howling Hellians of Dogtown School. (And Dave has posted a neat photo of the school.) Meanwhile, this photograph shows students at the school in 1947. (They’re not the Hellians, but probably had their moments.) The school closed in 1950. Also of interest: West Manchester’s Highland Park School notable, but Dogtown School would have been cool and York County’s Pinchgut vs. The Gut.

Last time he wrote us, Bill Schintz of photography fame told about Farquhar Park squirrels who had been at the White House.

Now, he has a question that someone might be able to answer: In the 1920s or 30s, some boys in York reenacted a movie scene.

They tied one of their gangs to the railroad tracks on Pershing Avenue, and as a train approached, they could not untie him in time.

A mud sale: Yes, one is upcoming in Airville. Here’s one explanation for the “mud.”  “It’s a busy day and we pray for nice weather,” an organizer said. “One year, we had rain and sleet and snow, and it was a true mud sale.”

Family of weavers: Family Heirloom Weavers operate in tiny Adamsville, but their carpets and other handiwork is found in famous buildings throughout the world. Check out a recent photo story on Family Heirloom.

Blog post of the day: Buffy Andrews, over at Buffy’s World, provides best of blogs on yorkblog.com for the week.

Forum of the day: Do you have memories of growing up in the Dogtown area of West York/West Manchester Township? The Exchange is waiting.