York County railroading: Here is how to find those old train stations 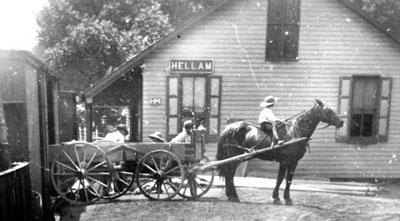 This photo of the Hellam station, date unknown, shows the same ‘Hellam’ sign that appears in the photo of Stanley Ebersole, below. The building still exists, though it has been moved from its original location. Background post: The Great Watermelon Train Wreck.

Pennsylvania Railroad Stations Past and Present is one of those sites that you can get lost in.
The York County section lives up to the billing. It has a list of still-standing stations and those that time or man have not been kind to. It’s a wonderful resource.
These sites brought to mind a York Daily Record story about a group of train buffs – the Northern Central Chapter of the Pennsylvania Railroad Technical and Historical Society – that meets quarterly in York County.
Here is the story on a meeting of that group – a meeting in which members brought about a dozen station signs: 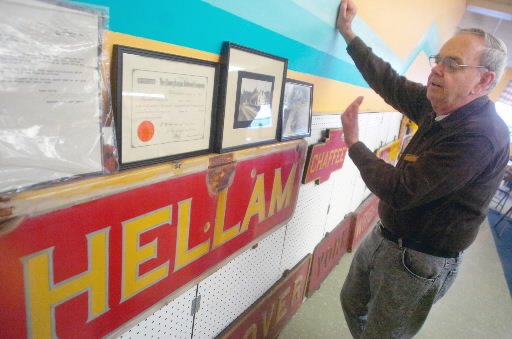 Stanley Ebersole of East Manchester Township remembers riding the train from Hellam to Lancaster when he was 10 in about 1950. His uncle, a conductor, would stop at the station and tell him to ask his mother if he could go along. For three years he rode between Lancaster and York when he had the chance. It cemented his love of trains for a lifetime.

Then 10-year-old Stanley Ebersole would never forget the excitement he felt when his uncle introduced him to the Philadelphia Phillies. Sure, he had met movie stars before, but this was baseball.
The boy’s uncle, Charles Dimmock, was a conductor on a train that stopped at the Hellam station near Stanley’s home. Stanley frequently rode the train in the conductor’s cabin with his uncle in the days when trains provided the main source of transportation.
“I was in heaven . . . I loved trains. I had two uncles on the railroad,” Ebersole said. “We made a lot of trips . . . Everybody traveled by train.”
That was nearly 60 years ago.
“I think as a boy I lived some of the best years,” Ebersole said.
Today, Ebersole, 68, is a member of the Northern Central Chapter of the Pennsylvania Railroad Technical and Historical Society. Sunday, he and about 35 other members of the group met in the basement of Otterbein United Methodist Church to share train memorabilia and information.
“It’s something that gets into your blood. . . . It’s a lot of fun,” Ebersole said of his hobby. “Along with the railroad stuff, you learn a lot of local history.”
Items Ebersole brought to the meeting included black and white photographs of the old Hellam Train Station as well as a 1950s steel and porcelain sign from the station.
Ebersole and his wife, Romaine, live in East Manchester Township and apply some of their train knowledge in their work as volunteer researchers for the York County Historical Society.
“We’re both interested in history,” he said.
Ebersole met fellow train enthusiast Bill Lewis at a train show about 30 years ago.
Lewis brought a 40-pound metal sign — one of about a dozen train station signs at the event — from the former York Train Station to Sunday’s meeting.
“I acquired this sign, and 10 days later . . . at a family reunion, I acquired a picture of my mother pushing me in a stroller, and this sign was hanging above,” Lewis said.
“It’s unusual to get this many signs together in one place at one time,” said train expert Ivan E. Frantz Jr., 52, of Jackson Township as he discussed his sign from the former Wrightsville train station.
Frantz and his son, John, 22, have shared their train hobby since John was a small child.
“I grew up with it, and I love it,” John Frantz said of studying train history, collecting memorabilia and building railroad station models. “It’s preserving something that used to be.” Train stories
Other local train lovers at the event had a hard time finding words to express their attraction to trains. But as they explained and told old train stories, romance seemed to be woven in many memories.
Stanley Ebersole talked of his aunt, Cora Dimmock, who is in her mid-90s and lives in Spring Garden Township. As a young woman living in York, she commuted via train to her job at Hamilton Watch in Lancaster, Ebersole said.
Dimmock met her husband — the train’s conductor Charles Dimmock, who was about 15 years her senior — on the train.
Today, Cora Dimmock, now a widow, and Ebersole share memories about the people they met many decades ago on the train.
“There’s a mystique about running a train . . . the cars — where are they going, where did they come from?” Bel Air, Md., resident Ken Meyer said.
Contact info
The Northern Central Chapter of the Pennsylvania Railroad Technical and Historical Society meets four times per year at Otterbein United Methodist Church in York.
For more information, e-mail Bill Lewis at lidldiv@comcast.net.
To learn more about building model trains, visit merchandise.pennsyrr.com.