Railroad Borough: ‘Probably no other town in America has a horse heaven’ 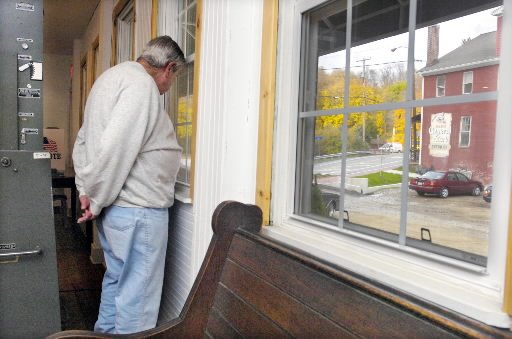 Gordon Mack worked as a clerk at voting precinct located in the Railroad Borough Municipal Building in this 2005 photograph. Railroad is one of York County’s most unsung municipalities. Background posts: Brewery profits produced landmark West York mansion and ‘Rocks in the Glen’ turns into town where things happen.

Some York County boroughs always have been defined by their bigger brothers.

Yoe’s relationship to Dallastown is one combo. Windsor’s link with Red Lion is another.

But none are as closely associated as Railroad and Shrewsbury… . 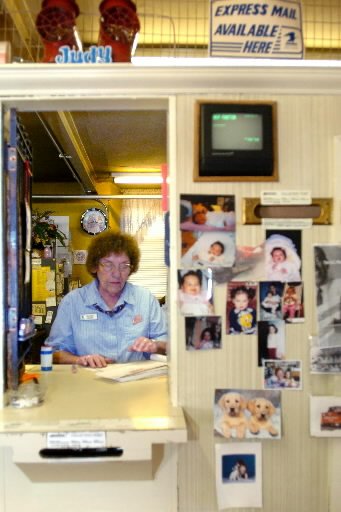 York Daily Record/York Sunday News photographer Bil Bowden captures the flavor of Railroad in this 2006 photo and caption: “There is no door-to-door mail delivery in Railroad, and hasn’t been since it was established in 1858. As in many other towns across America, residents stop at the local post office to pick up their mail. There, under the watchful eye of Postmaster Judy Jacoby, patrons pick up their mail at the window or open one of the old-style brass boxes that line one wall. Those coming to the window also meet Jacoby’s newest grandchild, whose pictures cover the adjoining wall. Minutes from the most recent borough council meeting are tacked up on a bulletin board, and there are photos of new babies born to local families, trophies from the days when the town had its own sports teams and a bench where folks can sit and talk.” Bowden also wrote that Jacoby, who has been on the job since June 1988, takes a personal interest in the people who visit her post office, even organizing pot-pie and spaghetti dinners to raise money for families in need.

Shrewsbury was located on the main road between York and Baltimore. Meanwhile, after 1838, the main railroad between York and Baltimore ran mostly along a branch of the Codorus to the west. Shrewsbury couldn’t be in two places at one time.
So, Railroad grew up as Shrewsbury’s link to the Northern Central Railroad. It was the main stop between New Freedom and Glen Rock. Like those two towns, it grew factories of its own.
But it never really grew much and is among the most obscure boroughs in York County today, even with the rebirth of the railroad as a rail trail.
The following story, from “Never to be Forgotten,” gives a flavor of Railroad’s past:

“Horse Heaven,” located on a hilltop near Railroad, is anything but for the animals meeting their end there in the 19th century. Frederick Helb’s nearby tannery thrives on the hide of horse. Worn-out horses await their fate in large barns. After they are killed and skinned, their remains are left for scavenger animals. “Probably no other town in America has a ‘horse heaven,’ ” a history states, noting that some residents still refer to that area as such today.