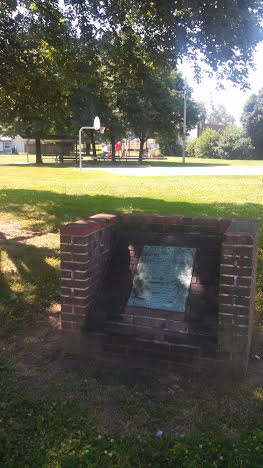 This marker, with plaque, marks Arles Park in York, Pa.’s, east end. The plaque gives a brief history of the city park at East King and Pattison streets. It was dedicated in 1961, six years after the formation of York Twinning Association. That community group formed an alliance with Arles, France, the source of the French name attached to the park. Also of interest: York still twinning with France, Germany after 50-plus years.

+++
The other day, I noted that visiting York’s parks is a good way to get to know the city.

Arles Park, I wrote, was the only one of the 25 city rec areas that I have not visited. (I’ve even been to tiny and obscure Little Jimmy’s Park on the city’s north side).

There’s a lot to that park, even though empty in my mid-morning weekday visit.

The Twinning movement grew out of the need to warm up relationships in that Cold War moment, and the now 60-year-old York Twinning Association provided the local hands to get it done. York’s Gen. Jacob Loucks Devers, a hero in France, and President Dwight D. Eisenhower, got behind the movement.

I also reflected on other things in that Arles Park visit.

The York-Arles  Twinning movement long has had strong support, even surviving the death of one of York Twinning’s early workers.

York’s Marguerite Eriksson became only the second honorary citizen of Arles in 1977. Four years later, she was killed in Arles during a mugging.

And the park has survived – so far – a bid to build a new fire station there. York City’s stations serving the east end – particularly the Laurel – are aging.  The city was considering the old City Market site, Princess and Duke, but train traffic on the old Ma & Pa Railroad threatens response time east of the tracks.

Hence, Arles Park became a candidate for the station site.

But I reflected on another part of the Arles Park story. The rec area was vacant during my visit. No one was using the basketball court or playground equipment. The grass needed a good mowing.

One could imagine a day when the park was well used, with summer playground programs and the like. Its quietness contrasted with overflowing suburban Cousler Park, which I drove by later in the day.

So Arles Park points to resources – both financial and human – that have shifted from city to suburbia in 50 years.

Maybe, I thought, suburban groups could twin – or become triplets – with Arles Park. That would make this  grassy area a testament to a new day – a 2014 story of rebirth. 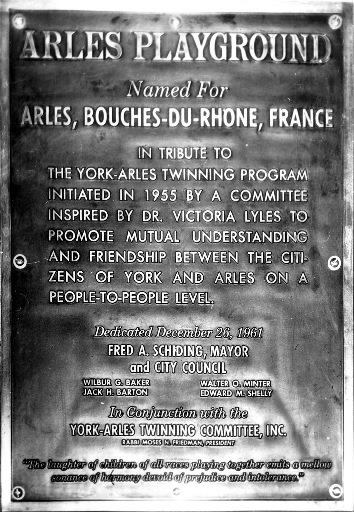 The marker at Arles Park. The plaque gives due credit to Dr. Victoria Lyles, the York City School District educator who sparked the twinning effort with Arles, France. Actually, the York Twinning Association counts its start as 1954, and is observing its 60th anniversary this year. York has another partner city in Europe. Germany’s Leinfelden-Echterdingen approved its twinning relationship with York in 1981.