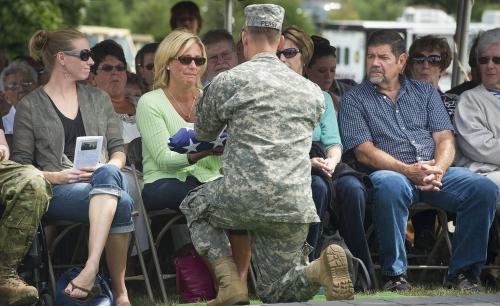 York, Pa., Daily Record/Sunday News photographer Paul Kuehnel captured a memorable moment Sunday at Prospect Hill Cemetery. Here we have U.S. Rep. Scott Perry, in military uniform, handing a folded American flag to Michelle Miller, second from left. Michelle Miller is the wife of Loganville Fire Company Chief Rodney Miller, who died in the line of duty earlier this year. The moment was part of a Court of Valor observance, tied to Sept. 11, 2001. The Court of Valor bears the names of more than 300 military veterans who earned medals for valor or sacrifice. So the day was a moment to recognize heroes in the emergency services and armed services. This photo brings together representatives of those heroes. Also of interest: World Trade Center I-beam at York’s Prospect Hill Cemetery: ‘Last week we had a young firefighter from Juniata … here to see it’ . 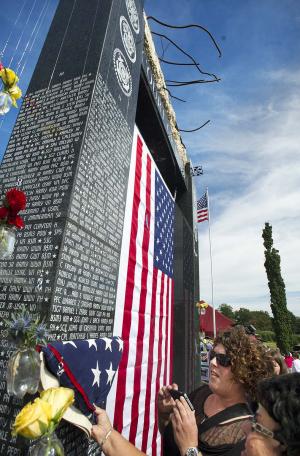 That’s an I-beam from the World Trade Center atop the Court of Valor, dedicated in 2009 to local veterans who have earned medals for valor or sacrifice. Here’s a description of the court from a YDR story: ‘The monument is an archway consisting of more than 15,000 pounds of granite and standing 13 feet tall. Part of an I-beam from the World Trade Center measuring 9 feet and 11 inches long sets atop the archway. An American flag hangs in the archway. Currently, there are 316 names engraved on the monument. Medals that qualify for inclusion are the Medal of Honor, Purple Heart, Bronze Star and Distinguished Flying Cross.’ Also of interest: Navy SEAL Neil C. Roberts: ‘In this simple grave … lies a national hero’

Living recipients of the Medal of Honor will meet in Gettysburg this week.

All those heroes in this setting of heroes.

So here’s a list of living Medal of Honor recipients.

Movie venues: Yorkblogger Joan Concilio gives us memories of movie houses, plus an interesting photo of the Hi-Way Theatre in the 700 block of West Market Street. 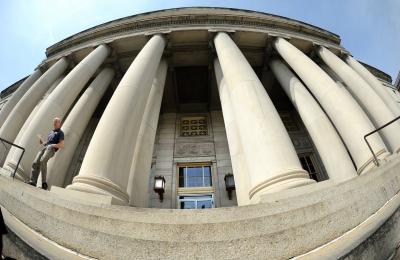 The York Post Office is no longer a post office. But this interesting photo captures it just before it closed down earlier this summer, giving way to a venue on West Market Street. Just thought this photo too good to pass over. For more about news photography in York County, check out Yorkblog.com/look.