Should York’s leaders have surrendered to the rebels? Pro and con 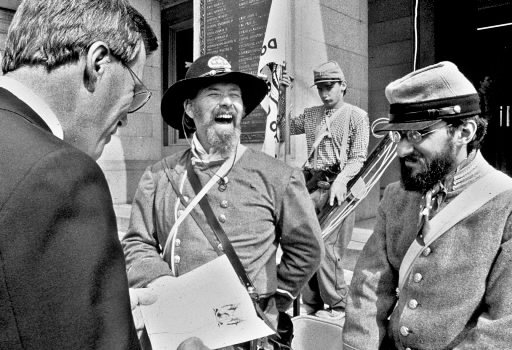 This good-natured mock surrender ceremony in 1988 served as a symbolic shift in York’s view of the town’s surrender to the Confederates 125 years earlier. When confronted with the demand by Confederate Gen. Jubal Early, played here by Richard Knapp of Red Lion, center, York Mayor William Althaus, left, declined. ‘We are no longer unprotected, having the finest police department in the country,’ Althaus said. A York County History Center-curated Civil War exhibit that covered the surrender followed in the early 1990s. Background posts: York finally coming to terms with its Civil War legacy and All Civil War posts from the start.

Should York’s leaders have carried the white flag upon the Confederate approach in the days before the Battle of Gettysburg in 1863?

That decision to surrender – to seek out the Confederates 10 miles from town – became controversial the moment it was made, and the debate continues to this day.

The following are excerpts from my article in the York Daily Record some years ago that address the question in pro/con format:

The surrender, coupled with grand events in York during the American Revolution and all-out community involvement in World War II often grouped under the York Plan, has influenced the way the city has viewed itself over the years.

The surrender decision has overshadowed the York area’s considerable Civil War accomplishments, and the city has marketed its history mainly around the events during the nine months in 1777-78 when the Continental Congress met here.

But things are changing. York-area Civil War events have risen in visibility since 1988, and particularly since 2000.

Leaders are embracing – and marketing – the city’s Civil War past on significant anniversary years.

This analysis frames the debate on the question of whether York’s town fathers should have surrendered the town.

York’s fathers sought out the invaders 10 miles to the west and surrendered the town. The Confederates entered York on June 28, 1863, and occupied it for two days, persistently prying goods and money from residents.

A brigade rode on to Wrightsville in an attempt to capture the Susquehanna River bridge, but Union forces torched the structure to stop the rebel advance.

On June 30, Lee recalled Early’s 6,600-man division, which countermarched to Gettysburg, where it sustained heavy casualties in fighting on Cemetery Hill.

The majority view was that of the Peace Democrats (Copperheads),  common for American border counties of this era. This position’s mantra was “The Union as it was, the Constitution as it is and the Negroes where they are.”

This position took a dim view of the war compared to the abolitionists of the North, and because the last enslaved person died in the county in the early 1840s, county residents felt that slavery was not an issue here.

In fact, residents were concerned that manumission would mean that freedmen flooding north across the Mason-Dixon Line would take scarce or, if not, would demand that county residents care for them.

County voters, thus, back Lincoln’s opposition in the elections of 1860 and 1864.

When the Confederates threatened invasion of the county in June 1863,  county residents were lethargic in their preparations.

Many felt a kinship with the Confederates in politics, and some county residents, indeed, had family connections with the raiders. This political view might have elevated the surrender option in the minds of the town’s fathers.

A different perspective: A third way
Passive resistance, rather than an active mission to surrender 10 miles up the pike, would have saved York and its reputation.

When Elijah White’s Confederates first came to Hanover, some of its leaders – others had fled – stood in its square passively or aggressively or maybe a little of both.

In his “Flames Beyond Gettysburg,” Scott Mingus told of one bold Hanoverian, who stated: “We will all soon join the Union Army.”

The summary of that encounter: No delegation met this cavalry unit on its way into town, and damage to Hanover was minimal. York’s fathers did something that set the borough apart from other towns facing invaded: They traveled to meet the Confederates, entered Confederate lines as they camped, seeking the surrender.