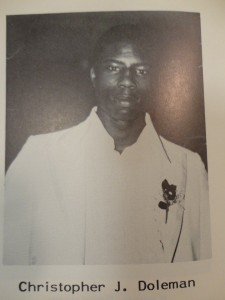 The start of the prep football season brings to mind a former York, Pa., High athlete who is now in the NFL Hall of Fame in Canton, Ohio. Chris Doleman is seen in his high school photo. He went on to football greatness at the University of Pittsburgh and then in pro ball with the Minnesota Vikings, San Francisco 49ers and Atlanta Falcons. Check out prep sports coverage this season at GametimePa.com. Also of interest: The greatest athlete ever in York County? The NFL community votes for Chris Doleman. 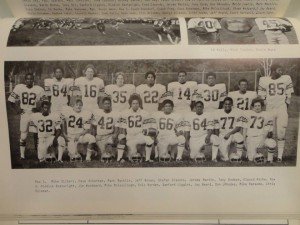 Chris Doleman’s size, even as a high schooler, caused No. 85 to stand out, among his York High teammates. York Town Square published a 5-year-old list of top athletes in York County prep history, as determined by the York Daily Record, coaches and fans. Chris Doleman did not make the top 10. This drew a response from Keith Oberdick in the commenting area of this blog. ‘Chris Doleman was easily the best athlete on this list, his bust appears in Canton Ohio and that says it all.’ Good point. I responded: ‘Not sure this is the case with Chris, but some athletes blossomed post-high school. Green Bay Packer John Kuhn wasn’t named Dover’s best athlete, and he wasn’t the leading rusher in Dover history. But look at him now. Having said that, Chris Doleman would have to be York County’s most accomplished athlete in the past 50 years, supported by the Hall of Fame vote.’ Sports fans like to argue about  such lists. Here’s a separate list that placed Chris in the top 10 of York County’s greatest athletes, but not No. 1. Who is the greatest athlete ever to come out of York County? Please comment below.

Shane Free is all about researching the Hex Murder of 1928. In fact, he’s making a movie about it.

Contact Shane if you can add insight to this internationally famous murder of a suspected witch in southern York County. Check out Shane’s work on Facebook and on the web at Hex Hollow Movie.

AIDS Memorial: Few York countians know about our county’s AIDS Memorial in York’s Albemarle Park. But a Dutch group does, as explained by the YDR’s Mike Argento

The YDR’s Paul Kuehnel comments on unexpectantly observing the Steam into History train near Glen Rock.