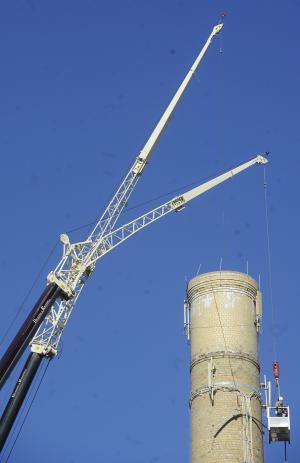 Two cranes, capable of reaching about 180 feet high, help technicians work on the Sprint phone network in downtown York last weekend. This is the view from below. For a view from above, see the photograph below. Also of interest: York church gained new cupola by ‘stealth’ .

Smokestacks have been in the news a lot in the past 12 months.

First, a lightning strike damaged an old distillery’s smokestack in Foustown, near Glen Rock. It had to be demolished.

Then, the old New York Wire smokestack in Mount Wolf was demolished because the site is being redeveloped.

One can see these old stacks as a metaphor for a change in York County, from the industrial age to the information age.

Now, we have another smokestack in the news, the old power plant stack on West Philadelphia Street. Sprint uses the smokestack to elevate and house communications equipment, and workers are putting in an upgrade.

This work also points to the same change. The stack is being re-used as part of the information age, but this one is remaining upright.

And the old Met Ed steam plant below the stack – which created power for industries around York County – is being renovated for reuse as a gym for fitness. Those working in information age jobs need the exercise because they’re behind desks all day, instead of using their hands operating a lathe.

For a description of what is taking place in this photograph made about 20 years ago, check out: Precarious perch above York, Pa.