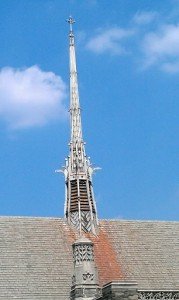 The steeple of Asbury United Methodist Church in York, Pa., rises high above East Market Street. The church was in the news this morning after firefighters responded to a roof fire. Also of interest: Asbury involved in York’s own Civil War.

Asbury United Methodist Church is one of those original York-area houses of worship.

Here are some facts about the church, drawing deeply on Georg R. Sheets’ book on Asbury: ‘Children of the Circuit Riders’ and the church’s website.

Founding date: 1781
Original location: A log house on present-day Roosevelt Avenue.
Prior address: Philadelphia and Beaver streets
Year congregation moved to present 340 E. Market St. building: 1925.
Facts about Asbury’s founding: The church grew after visits from circuit riders – preachers traveling on horseback. Freeborn Garrettson is credited as the father of the church. Here’s an excerpt from my “Never To Be Forgotten” about Garrettson:

“The frequent circuit riders passing through the county put up with rain, sleet, hail, lame horses – and superstitious residents. Freeborn Garrettson, one of the pioneer American Methodist preachers, loses his way when heading toward East Berlin. He hears terrible groans from a woman who claims she sold her three children to the devil. The woman’s husband tells Garrettson that his wife has been carrying a razor in her dress and has vowed to kill her children before the devil can take them. Garrettson invites the woman to a worship service the next day. By the end of the meeting, the woman is apparently calm. Later, the preacher learns that the woman has become “a blessed, pious woman” and her children are saved from an ill fate. Garrettson also ministers to a disturbed James Worley and his wife, Abigail, of York. The Worleys fall under conviction after hearing Garrettson preach and commence to rid themselves of their possessions. They start burning clothes, blankets, furniture and even money. Neighbors plead with the Worleys to stop and devise a plan to guarantee that they do so. A neighbor climbs onto the roof, stops up the chimney and the Worleys emerge. Garrettson returns and finds the Worleys in bad shape. He exhorts from the Bible and prays with them. Garrettson notes that the Worleys are restored physically and spiritually: ‘In the end, it was for good; many were astonished and brought to serious consideration.'” 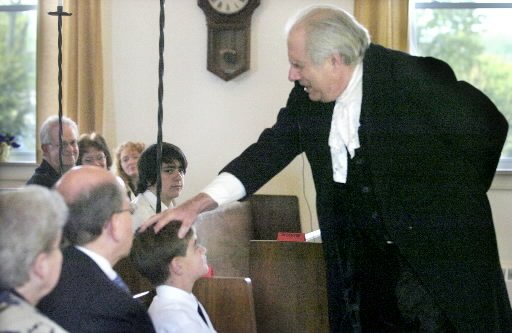