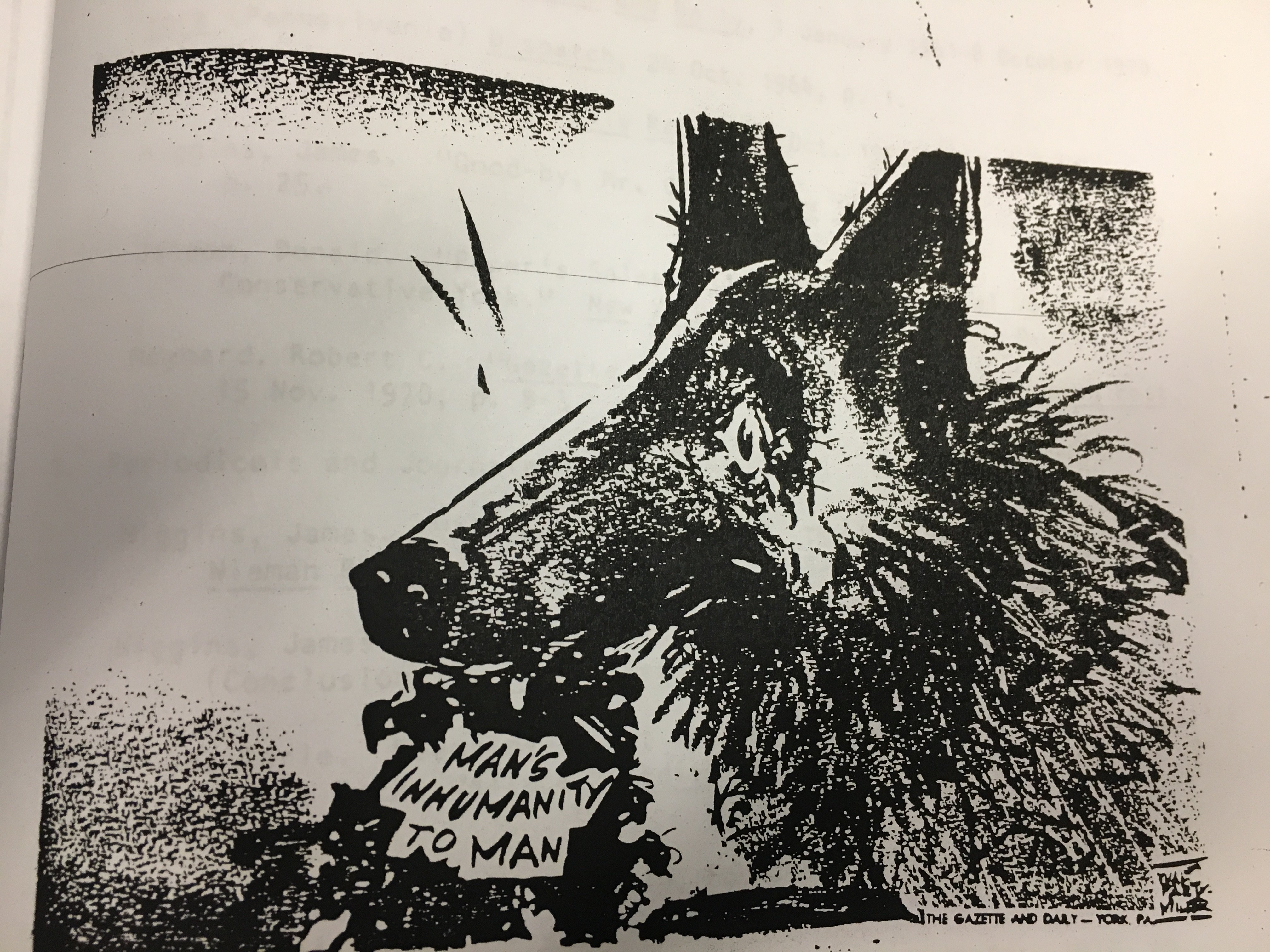 This editorial cartoon captures the role of the York Police's K-9 Corps in catalyzing the race riots in the late 1960s. Walt Partymiller drew this cartoon and scores of others in a long career as The Gazette and Daily's cartoonist. (York Daily Record file)
Posted by Jim McClureJuly 15, 2019 Archives, all posts, Black history, Explanations/controversy, People

Look at a map in 1770, and you’ll see roads radiating from York in all directions.

Over time, those roads – and then railroads – leading south and north saw the heaviest use and scored the deepest grooves. Those ruts were hard to escape, then and now, literally and symbolically.

The port of Baltimore beckoned, as did the markets and families of that largest city in a slave state.

Philadelphia had its place – with its port and Northern connections – but there was always that wide Susquehanna River to cross. For York County travelers traveling east, it was hard to get from here to there, then and now.

One is tempted to blame York County’s centuries-old uneasy relationship with race solely on location and its long border where North meet South, just 15 miles from York’s square.

History is never that simple.

But our history and our location do have meaning today as we near the 50th anniversary of the second summer of racial turbulence in York County, a moment that started when a white sniper wounded a black man as he was talking with a police officer on July 17, 1969.

In an attempt to make the buildup to this summer of unrest understandable, I put forth the contributing factors in the form of an equation, adapted from a column I wrote in 2009:

I hope this equation helps to explain that the riots did not emerge from nothing.

They help to tell the story of those days when war was waged on the city’s streets – a conflict that left a white police officer and black woman dead, more than 80 wounded and more than 100 arrested.

The quotes also underscore the issue of long-term racial inequality that York County faces to this day.

Run up to the riots

“The railroad tied York County’s economic interests to the South before the war, and for this reason many county inhabitants were reluctant to voice any opposition to slavery and the southern way of life. But York Countians had more in common with the South than just a penchant for southern money. They also shared many of the same values and political ideals of their southern neighbors.”

“Suppose one hundred Southern negroes choose York as their residence … . They will either work or they will not work. If they work they will crowd out of employment just One Hundred white working men … . If they do not work, they will have to be supported by the charity of the people.”

“The labor in the cigar factories of Red Lion is strictly native American and all white.”

“Mr. Hopewell, principal, asked the class to turn to page 22. That page was torn out of my book, so I told him about it. He made a joke of it, telling me to turn to page 11 two times. We all laughed … . Through it all, we learned.”

“At no time shall any of the land, or any building erected thereon, be occupied by any Negro, or any person of Negro extraction, excepting domestic servants or other persons, while employed in or about the premises by the owner or occupant thereof.”

“You can see it coming. You know there’s going to be nothing but $1.25 gigs for busboys or drivers, or in the hospital or laundries. And there’s no such thing as ‘working your way up.’”

“I was a 15-year-old kid walking home from the park and got shot.”

“The City of York has a high potentiality for racial tension and violence.”

“Somebody help me. Would you please help me?”

“There were three police cars … and of course they, too, (yelled) ‘White Power, White Power.’ That was so disheartening, not just frightening, disheartening that this was happening on this side of the Mason-Dixon Line. … This was what mom and dad brought us up to York from the South to escape … .”

“The only reason I can think of for this was to destroy black property.”

“He was really in favor of police dogs, which were probably the most inflammatory episode that we have in our community … which took things over the top … . It was nothing short of … Birmingham. I know all of you have seen films of people in Birmingham getting beaten and chewed by dogs. But that’s how it was here.”

“We had a happy, contented community here immediately following the Depression. The roots of evil have germinated from outside. The infiltrators, not conversant with the quality of sincere fellowship, have indoctrinated some of the residents with the philosophy of the cities … where they get away with such things.”

“A whole book could be written about the exploits of this crusty old gentleman who ran his office as if the twentieth century had never taken place.”

“ … York experienced the twenty-sixth most severe riot or urban revolt out of over 500 that occurred in the nation between 1963 and 1972. Adjusted for population, York’s revolt may have been the most severe of the era.”
– York College Professor Peter B. Levy, in his 2018 book, “The Great Uprising, Race Riots in Urban America during the 1960s.”

“York showed the willingness to engage in ‘civic therapy’ to put an end to two summers of race riots and collectively move toward solutions to underlying social problems in the late ’60s and early ’70s.”

“This is the first time that black and white have done anything like this together” – Elderly black woman. “There we were, and we were all worrying about the same problems” – Young white housewife. “100 percent breakdown in communications between police and segments of the (black) community” – York police officer.

“Why is there a Charrette in York? People in town just aren’t sure why we need it, but one cat I heard put it pretty well when he said this town’s dying away in a sea or plenty.”

“One of the outstanding threats to civic harmony pinpointed by the Charrette was quietly ended early in 1973 when Public Safety Director Leslie Jackson announced the abolition of the city’s K-9 Corps of police dogs.”

“If the riots hadn’t taken place, nothing would have changed.”

“Everyone knew who was involved. But everyone just thought it was even. One black had been killed and one white — even.”

“But the most important thing … at least Lillie Belle Allen had a voice, and at least the person who shot her was convicted.”

“It is convenient and comforting to think of the events of 1968 and 1969 as singularly horrible events, aberrations, if you may. In doing so, it relieves us of the responsibility to understand and assess the hows and whys these events happened. To really understand why and how this had happened, you have to look at our history. But in doing so we have to really look at the ugliness of our history. It forces us to commit to structural changes that we are not ready to address.”

“The 50th anniversary of the York riots is fast approaching, and, yes, some progress has been made. Back then, I would have given our community an overall F, but today, based on the progress we’ve made, I would give our community a C+. I did have our Police Department also at a C+, but since the Facebook article I downgraded them to a C-. If our city is going to continue to make progress, our business leaders and our Police Department have to lead the way.”

“There is a disease among us – a cancer that must be attacked – the cancer of division, fear and bias that holds us back as individuals and as a community. A diverse and welcoming community is not only just and right for all, but is the underpinning of the most dynamic and highest performing regions in our country. We can do better. Indeed, we must.”

Sources: Unless otherwise indicated, from the files of The Gazette and Daily and York Daily Record/Sunday News.

Plus one more thought, going forward

“Let me suggest to those who undertake this task, that it will be helpful to imagine an alternative memory to the currently constructed one, which casts the riots as betrayals of the real civil rights movement and which has deflected blame away from those who caused the revolts onto American citizens who continue to have to endure inhuman conditions.”

More: A tale of two challenging moments of racial testing – and how York scored