Pottery put the other Foustown, the one in Manchester Township, on the map 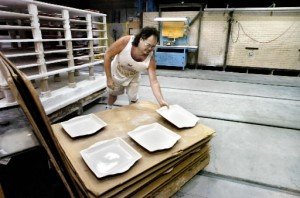 The first piece of pottery was produced by a Susquehanna-Pfaltzgraff forebear in the early 1800s. Here, Rick Heiner of North Codorus Township works on the last job fired in 2005 in the 200-foot tunnel kiln behind him. According to the York Daily Record/Sunday News, The kiln fired the vast majority of Pfaltzgraff products in recent decades. Susquehanna Pfaltzgraff sold the Pfaltzgraff brand name, intellectual property and retail stores to Lifetime Brands of New York in 2005. The new owner would outsource its pottery-making, and the Thomasville plant closed as a pottery-making operation. Background posts: Original WSBA station hands mic to demolition team and Hidden Loucks School reflects past way of York County life.

The recent York Town Square post Foustown now a ghost town: Raid there once netted 300 barrels of quality firewater told of a hamlet near Glen Rock that grew up around a distillery.
That settlement should not be confused with Foustown in Manchester Township that grew up around pottery… .

The Foustown north of York is no ghost town, considering the new houses cropping up around the small grouping of older houses. It’s located on the map as the home of the Christian School of York and the western edge of Cousler Park.
But 150 years ago, people would have known it as a center of a rich farming region, which specialized in pottery – Pfaltzgraff pottery.
“Pfaltzgraff: America’s Pottery” notes that Johann George Pfaltzgraff moved his home and pottery from Freystown, east of York, to Foustown. Pfaltzgraff was a key member of the family that had earlier settled in Conewago Township and would later make the Pfaltzgraff name synonymous with pottery worldwide.
“The local soil of the Foustown area was rich in red clay and limestone suitable for earthenware products,” the Pfaltzgraff book, published in 1989, states.
Some blue clay to make stoneware might have been present in stream beds, but most such clay was imported from Ohio.
So while the whiskey-making of the southern York County Foustown helped farmers find a market for their grain, the Manchester Foustown aided farmers by making utilitarian redware pitchers, plates, mugs, crocks, jugs and jars. Undoubtedly, some of the jugs stored whiskey, some of which may have found its way northward from the other Foustown.
The following story on the Pfaltzgraff and Appell families appears in the book “Heroes and Builders,” published as part of the 250th anniversary of York County festivities in 1999:

Through five generations, the Pfaltzgraffs have managed one of the largest family-run businesses in York County.
The famous pottery company was founded in 1811 by George Falsgraff, a potter who farmed 21 acres of land in Conewago Township.
His relationship to (Johann) George Falsgraff is unknown, according to ” Pfaltzgraff: America’s Potter,” but this second George Falsgraff arrived in York with his wife, Helwig, in 1833. It is from George and Helwig Falsgraff that the Pfaltzgraff line has descended and passed down its successful business. In all those years, the company has moved from Conewago Township, to the city of York, to Foustown, back to the city, out to West York, and in a revitalizing sweep in 1969, back to the city.
George and Helwig Falsgraff had five sons who ran the business with their father and two employees at an annual production of $500. It has grown to employ 3,500 workers worldwide.
Still headed by family, it is part of the Susquehanna Pfaltzgraff Co., which now includes wholesale distribution, retail and direct mail aspects of the original business.
Since 1922, the company’s interests have diversified. That was when fourth generation Helen married theater magnate’s son, Louis J. Appell. Appell’s father, Nathan, owned and operated every theater in York at one time with other playhouses in surrounding cities. He built the Strand Theatre for $1 million in 1925, a colossal extravagance in those heady days before the Great Depression.
He brought art and entertainment of all varieties to York County residents, everything from classical piano recitals to burlesque.
During this time, Helen’s father, George, was working to keep the pottery business strong. A world war and the economic crisis of the ’30s put many such companies out of business, leaving households without incomes. By changing the product line to include such basic, low-cost items as flower pots, he was able to keep the company going and men employed.
From Louis Sr. to Louis Jr., the company has become a national player operating radio stations in nine cities, cable companies in eight, an Internet access provider and a business telephone service.
Members of the sixth generation now serve on the board of directors of Susquehanna Pfaltzgraff Co.
By supporting such organizations as the Humane Society, the Historical Society of York County, York College and many others, the Pfaltzgraff and Appell families have shared their good fortune with the community they live in.