What are some uses for building if York post office moves out? 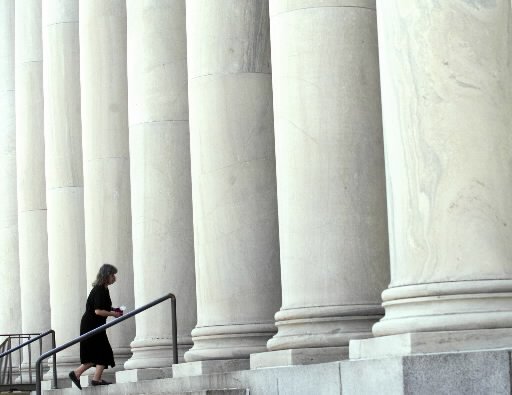 York’s downtown post office on South George Street is built in Classical Revival or Neoclassical style, according to Historic York. York’s postmaster said the idea of moving out of that building has been approved, but there’s no funding to move anywhere yet. Comment below if you have ideas about how that site could best be put to use, if the post office moves out. Update, 3/17/14: The Post Office has since moved to a new site on West Market Street, York. Also of interest:  York, Pa., postmaster: ‘The statues were made for the post office. We want to keep them in the post office.’

Did you notice the York Daily Record/Sunday News story on York’s historic post office?
If you’re walking around York looking at historic sites, check out the post office lobby.
It’s like a step back in time. Well, to about 100 years ago.
For that post office’s predecessor, see the postcard view of with the post Could York bus drivers also point out historic sites?
The story, “Future of city post office in limbo,” follows: 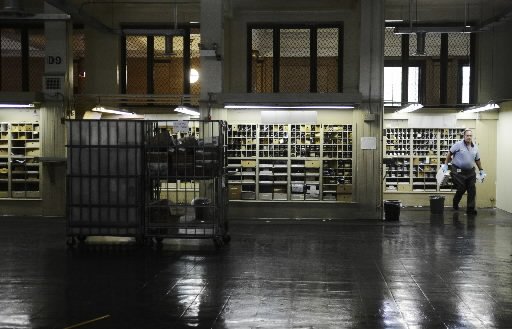 A large expanse of unused space provides one reason why the York post office vacated its longtime building.

The future of the downtown York post office remains uncertain, but city officials hope the building will continue to be a productive part of the community in years to come.
Post office officials first told the York City Council in 2005 they planned to move out of the South George Street site because the building no longer met their needs.
Two years later, plans to move are still in limbo, York Postmaster Robert Gingell said last week. The concept of vacating the downtown office has been approved, he said.
“Now, it’s a matter of funding,” he said. Post office projects all over the country are waiting in line for funding, he said, so “nothing is imminent.” No future location has been selected, but the plan is to keep some sort of retail presence downtown, he said.
Meanwhile, a request from city officials for $8.5 million to transform the building into municipal offices was included on the state’s funding wish list. But Mayor John Brenner said there are no official plans.
“We asked for money for that location and the development of a city government facility or other facility that would benefit the city,” he said. Locating city offices there is “certainly an option.”
Space grows short in City Hall, which houses government offices and the growing police department on West King Street.
“The city police department now consumes most of the City Hall structure just as they do the budget,” Brenner said with a laugh.
Built in 1941, City Hall is not an up-to-date facility for city government or police, he said. The second floor is not accessible for those with disabilities because there is no elevator, he said.
The city is investigating options, Brenner said. The feasibility of using the post office has not been studied, he said. Other buildings or renovations are also possibilities.
“We’re not ready to make any decisions, but are reviewing our options,” he said.
He hopes the post office does maintain a downtown presence and envisions a government center where residents could pay their taxes, do postal business and handle multiple tasks in one spot. But no matter what happens, the city wants to be involved in the future of 200 S. George St. if the post office leaves.
“Obviously, it’s a key downtown location,” Brenner said. “We do not want to see a beautiful building of that wonderful architectural magnitude sit vacant and fall into disrepair.”
Other uses for the space have been floated in the community.
A resident brought the idea of working with the city to use the post office to the York City School Board at their last meeting, said board Vice President Tom Foust.
But the school district has already spent a quarter of a million dollars in planning for new administrative facilities and are “very close to going out to bid,” Foust said. Plus, there was never any definite information about the post office’s plans.
“We don’t have time to wait, given the investment that we’ve made,” he said.
If the post office chooses to leave, the 1912 building has qualities that could make it attractive to another user.
Accents inside such as marble floor and brass and bronze fixtures, kept polished by staff, make the post office “a very pretty building,” said Karen Arnold, executive director of Historic York. It also has ample parking, she said.
“It would make beautiful high-end offices,” Arnold said. “It’s solidly built. It’s probably never going anywhere. … It’ll make someone very happy.” 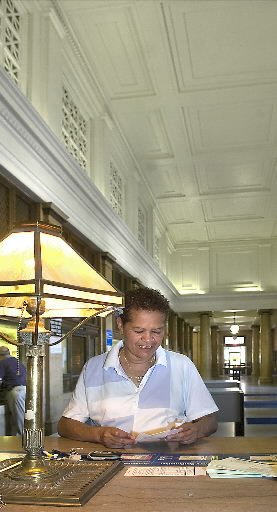 A customer uses a table made of Italian marble with brass legs, in York’s downtown post office. The post office, built 1912, has many accents inside that have been well maintained over the years, according to Historic York.