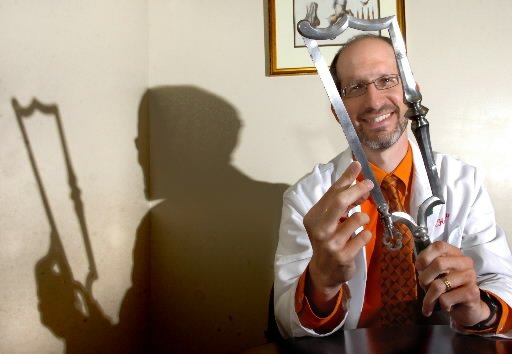 York Hospital’s Dr. Douglas Arbittier shows a 1730s-vintage saw used to amputate limbs. He has demonstrated saws from his collection on the History Channel program. Also of interest: Arbittier’s private medical museum in York County: ‘I can almost feel the souls of all the physicians that used all this stuff’

Douglas Arbittier has collected surgical saws and bloodletting devices  for years. He even has a Web site to show off his collection.

His collection gives a poignant view of progress in medicine and the horrors of war.
York County, of course, is historically in tune with such horrors. In fact, the U.S. Military Hospital operating in York during the Civil War had its own collection of surgical saws… .

That hospital was not a temporary unit set up in the aftermath of the Battle of Gettysburg. It operated from 1862 until past the war’s end in April 1865. Its trial by fire came when patients arrived via rail straight from bloody Antietam.
It was large enough to fill up a good bit of Penn Park, but after Gettysburg, patients were treated in the still-standing Washington Hall on South George Street and the county hospital that was part of the county home complex at the north end of Broad Street.
The hospital served as a hub for women from the community to develop and displayer their nursing skills and organizational acumen in gathering donated medical supplies.
York Hospital’s founding in 1880 is often associated with the medical experiences gained from the then-demolished military hospital.
So, in ways he may not even imagine, Dr. Arbittier’s hobby links well with an important chapter of York County’s past.