Descendant of powwow doctor: ‘Powwowing was done for good’ 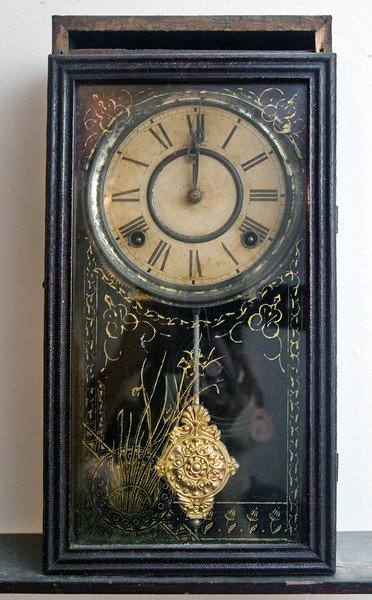 The clock, which belonged to Nelson Rehmeyer and sits in the Rehmeyer house today, supposedly stopped at 12:01 a.m. on the night he was killed in 1928.

With all the news stories about the Hex murder house opening as a museum and the release of the powwowers handbook “The Long Lost Friend” on CD , the white magic practice of powwowwing to cure maladies has been raised.

Some people believe Nelson Rehmeyer, the victim in the Hex murder case of 1928-29 was a witch. Others say he was merely a doctor practicing powwowing, popular in many York County towns in the 20th century.
The following York Daily Record story describes the practice:

Janet Neagley Craumer is 87 and remembers well the folks who relied on her father’s powwow powers to heal their pains and worries.
“It’s a shame people don’t know more,” Craumer said Friday. “My dad never did anything bad.”
Mothers would come to her father’s farm carrying their babies who weren’t growing, Craumer said. Her family saved the string from feed bags for use in the home and for her dad’s use helping the mothers.
“He would take the string and measure the baby from head to toes and around the body,” she said. “The mother held the baby and put the baby through the strings three times. She would come back three times.”
The babies always grew, she said.
A male powwow doctor could teach a woman, but not another man, according to tradition. The reverse applied to women, who were allowed to teach powwowing to men only. Craumer said her father’s mother practiced powwow, and her great-grandfather Joseph Negley was one of the biggest powwow doctors in York County.
The spelling of the family name changed over time.
Negley drove a black horse and buggy, as physicians later did. In the days before telephones, Negley treated many people who came to him at the former Gray Horse Tavern in the Lewisberry area, Craumer said.
“You have to believe in it to help,” she said. “It’s essentially faith healing. Too many people think it’s a bad thing. I would like to get the word out that powwowing was done for good.”
Rickie Ebaugh, the great-grandson of Nelson Rehmeyer, a powwow doctor who was killed in 1928 by three young men trying to rid themselves of what they believed were life-defeating spells, also believes powwow doctors have been falsely perceived as evil.
He hopes to open Rehmeyer’s turn-of-the-century German farmhouse in North Hopewell Township as a tourist attraction to help people better understand powwowing and the truth about his great-grandfather. A historian’s view
York historian Tom Schaefer said powwowing is an interesting bridge from pagan, pre-Christian times in Europe. Pennsylvania Germans Christianized many powwow practices during a time when science-based medicine was in its infancy.
Powwow doctors were supposed to be the ones to see to have spells removed, Schaefer said. They were not the ones who used the black arts or cast spells.
“My great-grandmother on my father’s side and her husband were white witches,” Schaefer said. “I have a copy of the ‘Long Lost Friend’ they gave me as a child.”
That’s the book of spells the three men tried to steal from Rehmeyer.
When a cow stopped giving milk, the farmer would go to the powwow doctor for help, Schaefer said.
The whole notion was not so far-fetched.
“Reality is couched in the mind of the beholder,” Schaefer said.
Today, we have moved into holistic medicine, Schaefer said. Herbal remedies are experiencing a resurgence, as are acupuncture and yoga. They all predate modern science. They all have a valid place in treatment.
People still rub a cut potato over warts, then turn around three times and throw it as far as possible. For some, the warts disappear. That’s a powwow cure, Schaefer said.
All doctors can cite experiences with the placebo effect when a patient receives an innocuous pill and recovers. It’s evidence of the power of the mind.
People would really like to believe a good ghost story, Schaefer said. Those feelings have survived.
“There is still so much we do not understand about the human mind,” Schaefer said. “When we look at powwowing and how people react to any change in science and culture, there is so much deep inside us that is ancient.”