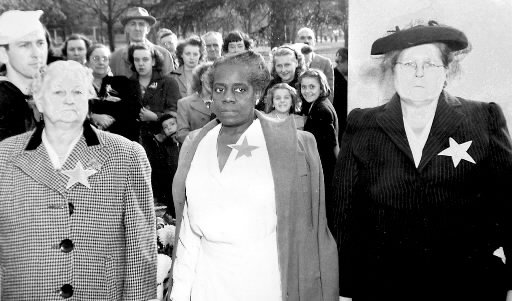 The American War Mothers monument in York honors those who served, died and achieved in World War II. It is an overlooked York County landmark.

A photograph published with my column on Sunday, ‘A Memorial Day tour of, well, memorials,’ brought a nostalgic response from a reader.
Linda Just wrote about my tour of York’s military statues, particularly Penn Park’s American War Mothers marker: …

Wow ! The picture of the ladies in Penn Park really brought back a couple of memories.

My grandmother was a member of the War Mothers. I’ve never known why but when she attended a meeting she would wear a white uniform (similar to a nurses union), and it looks as though Mrs. Harley might be wearing a white uniform in the picture. I don’t believe Granny wore the uniform to every meeting, but most. I would really like to know why they wore white uniforms.
One of the few pictures I have of my grandmother she is in Penn Park, dressed to the “nines,” standing very close to the war memorial. Obviously she was there in conjunction with War Mothers.
She was a War Mothers member because her only son, my uncle whom I never met, was killed in the war. Uncle Eddie was killed at Pearl Harbor, 18 days before I was born.

As a child I lived very close to Penn Park. Many days were spent playing in the park, walking around the monument, seeing but never seeing, the monument. Rather like white noise not heard…..you didn’t really “see” the monument anymore. Walking the block and a half south on Beaver St. to school you would think I would “see” the monument…….but no, I had seen it so many times it just became part of the landscape.

Because of your article, the next time I’m near Penn Park I promise I’ll have a look at the monument. I might even park my car and go see the monument…..maybe for the first time.
Thanks much for a bit of a “home happening.”

If anyone knows why they wore white uniforms, please comment.