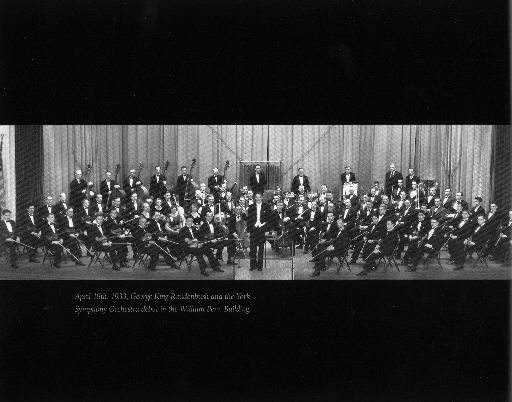 The York Symphony Orchestra, with George King Raudenbush taking the baton, debuted April 18, 1933, at the William Penn Senior High School Auditorium.
“Musicians, board members and their wives laid siege to the community to sell tickets for that first concert, even to the extent of hawking them on street corners,” a new book on the symphony states. … .

“Records indicate that Grace McConkey, long a devoted volunteer, and Roy O. McLaughlin, the Symphony’s business manager, pounded on Mayor Antine’s door and refused to leave until he had bought a ticket for the first concert!”
“York Symphony Orchestra, Seventy-Five Years” tells the story of the symphony from its Depression-era beginnings to the current day. Its star-studded 75th anniversary season featured violinists Joshua Bell and Nadja Salerno-Sonnenberg, among others.
The book can be ordered by calling the YSO office at 812-0717. The book can be purchased by check or credit card and can be picked up at the YSO office on Tuesdays or mailed.

Did you know?
A. Reginald Fink conducted the Zion Reformed (now UCC) Sunday School Orchestra in 1927. Fink became the first conductor of the Youth Symphony in 1957. This photograph appears in the recently published book: “York Symphony Orchestra, Seventy-Five Years.”