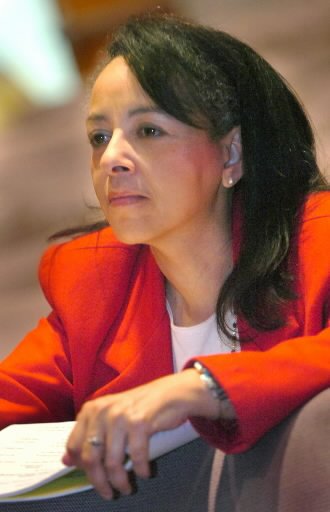 Dorothy E. King is a playwright and a professor of sociology. This York native grew up on West Princess Street, York, with many other people of accomplishment. Here, she looks on as her play, ‘Mr. Dr. Lehrer Friend,’ is performed in her hometown. Also of interest: York’s West Princess Street in 1950s: ‘I knew there was something special about that area’ .

The York native’s production parallels the experiences of Jews and blacks under oppression and brings in Bamberg, S.C., as a location. Bamberg was the home of many black families who came to York to work in factories in the 1920s and 1930s.
King’s appearance in her hometown may pique interest in a dramatist who history will fondly remember… .

The following question and answer article with Dr. King was published in the York Daily Record in 2001 and appears in the newspaper’s “Black History Profiles in Heritage” distributed to several hundred York County classrooms in February:

If you want to be someone, sometimes you need to claim it.
That is the message Dorothy King, who is a professor of behavioral sciences at Penn State, learned when she began to write plays.
“I’ve always written . . . but I didn’t take myself seriously as a writer,” King said. “One day, I said ‘I’m a writer.’ That’s when I officially became a writer. . . . I kind of claimed it.”
That was in the 1970s. Eventually, she participated in an International Women’s Poetry Festival, which included about 13 women from different ethnic groups reading poetry.
King read a poem she had written about relationships.
“After I read and the program was over, . . . these women asked me, ‘Where is your book?'” King said. “I realized at that moment . . . that any experience I’ve had is not unique to me, and that freed me up to feel comfortable about writing.”
Since then, King has written three full-length dramas with music and 12 short plays.
King wrote a play called “White Rose, Black Skin, York in the 19th Century” for the 25th Annual Conference on Black History in Pennsylvania, which will be held today through Saturday in York.
What is your proudest accomplishment?
“What brings me the most joy is creating good theatrical productions,” said King, founder and director of Pen Owl Productions, a multicultural ensemble that has performed throughout the Harrisburg and York areas. “We are committed to presenting drama as a way to address diversity issues. Most of our plays are my original creations.”
What makes a hero?
“I prefer, instead, to think of people in terms of angels. Angels are average people who go about their lives quietly impacting the lives of others. Angels are people whose lives are centered on kindness and service to others. Anyone can be an angel. Most people don’t even realize when they are,” King said. “Smiling at a stranger who’s had a bad day, holding the door for an elderly person, volunteering in a youth program makes one an angel.
“Being an angel is a lifestyle one chooses. It’s ongoing. Being a hero is a feat one accomplishes. It might only be for one time.
“. . . I do think of myself as an angel. I also recognize angels when they are sent to me. I thank them.”
Who is your hero?
“I’ve had many angels in my life. There was an elderly man in Paris who directed me in French to the Metro stop and then walked quietly behind me to make sure I got there. He was my angel that day. There was the mother-in-law of one of my friends who loaned me $1,000 to attend a writers’ retreat. She was my angel that day. There was my eighth-grade English teacher who used to make us recite poetry. I went on to have my poetry appear in major anthologies. Surely she was my angel,” King said. “My biggest angels by far, though, were my parents, Helen and Alonzo King. They supported me and encouraged me in everything I did.”
What affect did you have on York County or on your profession?
“I tend to define my profession as being a writer, and I think the impact I’ve had is to try to bring positive theater to light,” King said. “Oftentimes I’ve heard people complain that there is no good black theater, and when I hear that, I say well what are you doing to make it better. People say ‘I can’t write’ or ‘I can’t sing,’ and I say you can commission someone to do something.”
Who or what is your inspiration?
“I am inspired by my belief that we all have a purpose. I believe that God has sent us here to make life a little better for each other and to take care of the earth. Writing is my contribution. That’s what inspires me.”
What is your favorite York County memory?
“I have many York memories. I loved going to the York Fair as a child. I think Tuesday used to be children’s day at the fair. Schools were closed and children got free passes.
“I also loved going to Hersheypark in the summer time. Many of the African-American churches would sponsor the same day at the park. It was fun to see who was with whom. This was when the picnic area was more important than the rides.”
What would you like your hometown to know about you?
“I am also proud to say I’m from York. I don’t feel York has been tarnished by recent happenings. It’s a great city. And, of course, it was the first capital of the United States.”
If you could change one thing about your life or something you did, what would it be?
“I think we are where we are supposed to be,” King said. “What I wish is that I still had my parents.”