When did Wrightsville ferry service end? 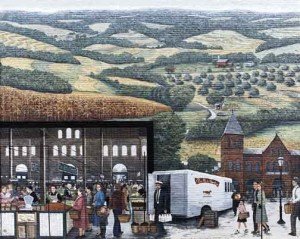 This Mural of York traces farm products on their way to market. It’s located near York’s Central Market on North Beaver Street. Since the 1700s, the county has been a major grain producer.

Today’s quiz, extracted from the “Along the Susquehanna” exhibit at the York County Heritage Trust http://www.alongthesusquehanna.com/:
Q1. When did the last Susquehanna River ferry end service at Wrightsville?
Q2. What put the river town of York Haven on the map? …

A1. The last regularly scheduled ferry crossed the Susquehanna in 1932, 202 years after the first raft started operating between Wrightsville and Columbia.
The ferry transported mainly passengers in those later years, saving residents without wheels from the mile-long walk across either the 1897 railroad bridge or the new Columbia-Wrightsville bridge.
Just a guess, but perhaps the closing stemmed from the fact that the new bridge afforded a streamlined pedestrian and vehicle crossing. When it was the only crossing, the old railroad bridge was notorious for traffic tieups. And who would want to walk across with trains coming and going?
A2. With Brunner’s Island near by, York Haven today hints little that it started as an agricultural center. The borough started as a milling town of many grains. But wheat, particularly taking a liking to York County’s climate, was a major product and would remain so until the plains out West were inhabited and cultivated.
The streets in York Haven are named after the various mill operators – Hiller, Stansbury, Wilson, Townsend, Weatherburn, Cole and Gwynn.
The millers particularly liked the proximity of the 1796 canal at York Haven, affording raftsmen the ability to bypass falls in the Susquehanna.