The Hessians of York County more than mercenaries

Artist Lewis Miller produced these drawings (and one below) and 19 others of York County residents in the 19th century who were former German soldiers fighting for the British in the Revolutionary War. Descendents of these Hessians live in York County today. (These drawings courtesy of York County Heritage Trust.)

Jonathan Stayer, profiled in a recent post State Archives, made a interesting contribution to York County history in his 1988 master’s thesis. Its title explains why: “The Hessians of Lewis Miller: Assimilation of German Soldiers in America After the Revolution.”
Artist Lewis Miller captured a group of these German mercenaries on paper, and Stayer researched and wrote about them. Today, Stayer heads the reference section of the State Archives, part of the Pennsylvania Historical and Museum Commission.
Generally, these “Hessians” were deserters from the German armies, who found their way to York County, according to Stayer. Some of them, such as Leonard Baumgardner, served in Armand’s Legion of the Continental Army after leaving his German unit.
Some of the Hessians stayed behind at war’s end and, aided by a predominant German culture, assimilated into the fabric of York County life.
One of the most prominent Hessians, Frederick Valentine Melsheimer, a chaplain, became a noted McAllister’s Town – later Hanover – minister. He gained national stature in entomology for his study and collection of insects… . 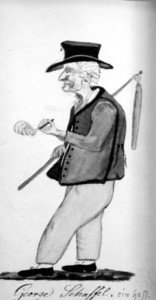 Now, that would be an interesting research project.