York Springs a town in change, but what’s new? 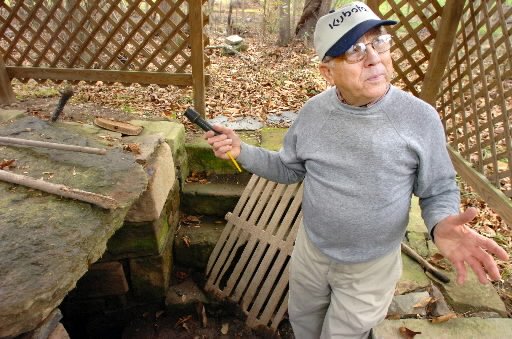 Don Miller shows off the stairs to the spring that gave York Springs its name.

Adams County’s York Springs can boast of a lot of things.

Brig. General William Warren Stewart, touted as the highest-ranking Civil War officer from Adams County, hailed from this eastern Adams County borough.
It was the birthplace of John W. Bittinger, turn-of-the-20th-century York County judge.
The Rev. Daniel Batwell, rector of Episcopal churches in York and Carlisle and York Springs, went to his farm near the borough to recover his health after enduring a dipping in the Codorus Creek during the American Revolution. He got the bath and time in the slammer upon suspicions that he was a British Loyalist. Congress released him under conditions that he take a loyalty oath or return to British lines. He took the latter path, becoming a chaplain of a Tory regiment.

The Rock Chapel, the oldest Methodist meeting house west of the Susquehanna, was established near York Springs in 1773.
Nearby Trostles Quarry is home to dinosaur footprints discovered in 1937, reportedly considered at the time as the finest discovered collection of dinosaur prints in the state.
York Springs has been noted for its example of a community in change — a quarter of its 600 residents are Latino. Harvesting the abundant fruit in that area is the attraction.
The borough’s historical society http://www.yosshs.org/, which holds monthly meetings featuring a variety of guest speakers, points to other attractions: York Springs’ Underground Railroad past and an old-time election house.
But the most intriguing attraction is only open to the public upon request — the site of the York Sulphur Springs Hotel. The York Daily Record/Sunday News profiled what’s left of the spa, which attracted visitors from Baltimore and other faraway places in the early 1800s. People were constantly either coming or going.
Nothing is left of the resort, but owner Donald Miller literally uncovered the spring with its medicinal waters some years ago. Check out the story: http://www.ydr.com/search/ci_4763963.
The point to all this is that even a small town like York Springs, shortened from the less winsome York Sulphur Springs, has much history to tell. Drive through York Springs, and it might seem like just another attractive Pennsylvania town with 100-year-old houses lining its streets.
But a lot went on there, and with a population in change, lots more is ahead.