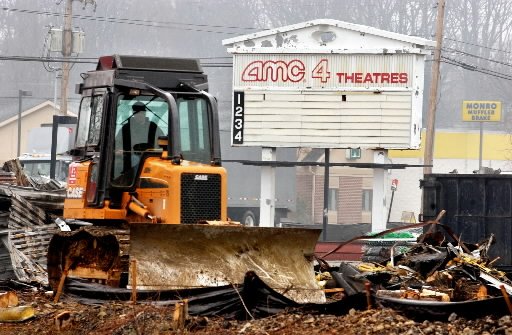 Construction equipment demolishes what was the AMC Entertainment movie theater in Springettsbury Township in 2004. Development on the site now includes a retirement home that celebrates the old drive-in also on that site. Background post: Stony Brook Drive-in: ‘I saw ‘Pulp Fiction’ there …’

The old drive-in east of York, whose land is now covered by a retirement village, drew its name from the nearby village of Stony Brook.

Here are some details about that old Springettsbury village, mostly gleaned from the township centennial book (1991) and York Daily Record stories:

— The village is located where the railroad crossed the turnpike, Lincoln Highway, Route 30, 462 or whatever the road was named at the time.
— It drew its name from Stony Brook, a nearby stream flowing into Kreutz Creek.
– The village is located near the site of Camp Security, a former British POW camp, and the Schultz House, York County’s oldest residence.
– At the turn of the 20th century, the village bore the normal fixtures that grow up where rail meet road: a store, post office, coal yard, warehouse and about 20 residences.
– Two early York County businesses operated there: Heistand Mill, an early York County gristmill, and a blacksmith shop, noted as the first such establishment west of the Susquehanna.
– John Stover’s property near the village boasted a spring of chalybeate water, well-known in its day for its iron-rich mineral content. Water flows from this spring today.
— The village was known as a tobacco-growing center, the plant thriving on the rich limestone soil.
— Some reports suggest that turn-of-the-20th century residents considered – but never finished – organizing Stony Brook into a borough.
— The appearance of the village changed in 1998 when workers demolished the rusted humpback bridge spanning the railroad tracks for an estimated 60 years.The bridge left drivers at the top with no view of oncoming traffic. Below the bridge, a block-long residential street was sheltered from heavy traffic.
– At the time of the demolition, about 12,000 automobiles crossed the bridge each day, a bustle not apparent even in the village’s heyday 100 years before.