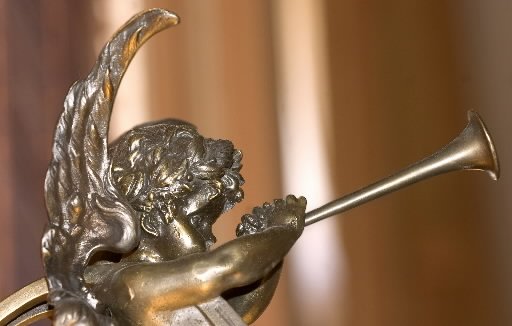 The Women’s Club of York exhibits a style in architecture and interior fixtures common in the Victorian Age. Here, an angel-shaped sconce is on display. Also of interest: York Sunday News columnist: ‘Time for York to break shackles of Colonialism’.

The ornate Women’s Club of York building made the news this week because of an almost catastrophic electrical fire that damaged the building.
Looks like the owner plans to rehab it, which would mean that the leasee, the venerable Women’s Club, will be able to keep meeting there.
The Women’s Club building is one of York’s most beautiful structures. Here’s Daily Record writer Jennifer Vogelsong’s story updating the building, before the fire… .

When Eric and Jennifer Salzano moved to York from Frederick, Md., two and a half years ago, they saw the city as a lackluster gem begging to be shined.
“There are positives and negatives,” Eric said.
Eric is confident that with the baseball stadium and other changes, the good will surpass the bad. He sees York turning into the thriving place everyone hopes it will be — a place where there are no fears of crime and cultural shows are sold out. It might be a big dream, but the Salzanos believe.
Like so many entrepreneurs, the couple want to be part of making the city where they live a better place.
“We meet quite a few people who come into York and see the future of it,” Jennifer said.
For 20 years, Eric and Jennifer have owned rental properties. They manage a few premium office spaces along East Market Street.
“We renovate to make it presentable so it attracts quality businesses,” she said. “It all helps contribute to the economic well-being of the city.”
When they purchased 228 E. Market St. from the Women’s Club of York in July, the arrangement was unique.
The story started a few years earlier. In March 2005, Jacquie Sutton, former club president, decided to sell the building. The club that had once thrived in York with 600 members dwindled to fewer than 100 and couldn’t keep up with its mounting bills. The $23,000 a year to keep the house going didn’t even include the increasing repairs and upkeep. The club was founded to make York a better place by giving back to the community, but with all the bills, it couldn’t.
“We hadn’t followed through because we weren’t in financial shape,” Sutton said.
In 2005, the club was down to $20,000, not enough to get it through the next year. Sutton said members of the organization, who
have a deep faith, prayed for a buyer who would value the building, let them stay and take care of the renovations and upkeep.
Enter the Salzanos.
“You don’t want to see a building fall into the hands of an office who would turn the auditorium into cubicles,” Eric said. “Once you destroy the form from the past, you can never get it back.”
Before buying the building, which dates to 1880, Eric did a thorough inspection. It wasn’t a three-hour deal, but days and days of examining every inch. There was certainly a lot of work to be done, but it was right up Eric and Jennifer’s alley.
“Eric sees history as a positive thing that shouldn’t dwindle away,” Jennifer said.
For $105,000, it was theirs.
Sutton and current president Doris Hartdagen said they fully expected to pay rent, but the Salzanos would have nothing of it for 10 years. Not only that, but the Salzanos decided to pay the heat and electric, which can be substantial in such a large, old building.
It’s just another way for the Salzanos to give back. Jennifer said now that the club doesn’t have a financial hindrance, it is able to return to its mission of making York a better place.
Hartdagen said the club is involved in community projects such as collecting towels and baby clothes for York Helping Hands. The club is relieved it is able to continue its mission and not worry about bills.
“It’s a unique partnership,” Sutton said. “I don’t know of another one like it.”