Memorabilia from ‘the Oaks’ hard to come by 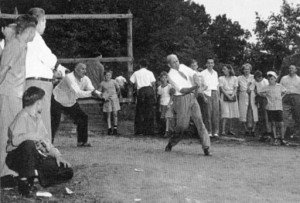 Employees of the Blaw-Knox Special Ordnance Division plant, succeeded years later by Harley-Davidson, took over White Oak Park for a company picnic on July 29, 1945. For years, the park, located north of North York, served as a popular meeting place.

Keystone Record Collectors’ Phil Schwartz is working on a project to remaster music from groups that appeared at White Oak Park, called “the Oaks.”
The park, located in the vicinity of the Masonic Temple north of York, was a popular post-World War II picnic place and early 1960s teen hangout.
Schwartz explained that the groups – the Del-Chords, Exciting Invictas, El Dantes – often made “demos,” and much of the music was never released. The working title of the CD project is “White Oak Park-Battle Of The Bands.”… .

Not much is left to point to the popular venue, at one time owned by the Sheffer family. Photos, posters and the like of the dances are surprisingly rare.
If you can flag Schwartz on any memorabilia, photos or artifacts linked to the site, e-mail him at Pschwa7845@aol.com.
A sampling of posts relating to White Oak Park:
Additional posts on White Oak Park or the Shady Dell:
–Just try to resist this memory-tugging photo of White Oak Park.
–Stadium will be site of The Oaks music reunion
–Wanted: Old photos of teen hangout.
–Memorabilia from ‘the Oaks’ hard to come by.
–Memories of The Oaks pile up.
–Memories of The Oaks pile up – Part II
–The Dell: ‘It was like family’.
–White Oak Park welcomed Blaw-Knox workers .