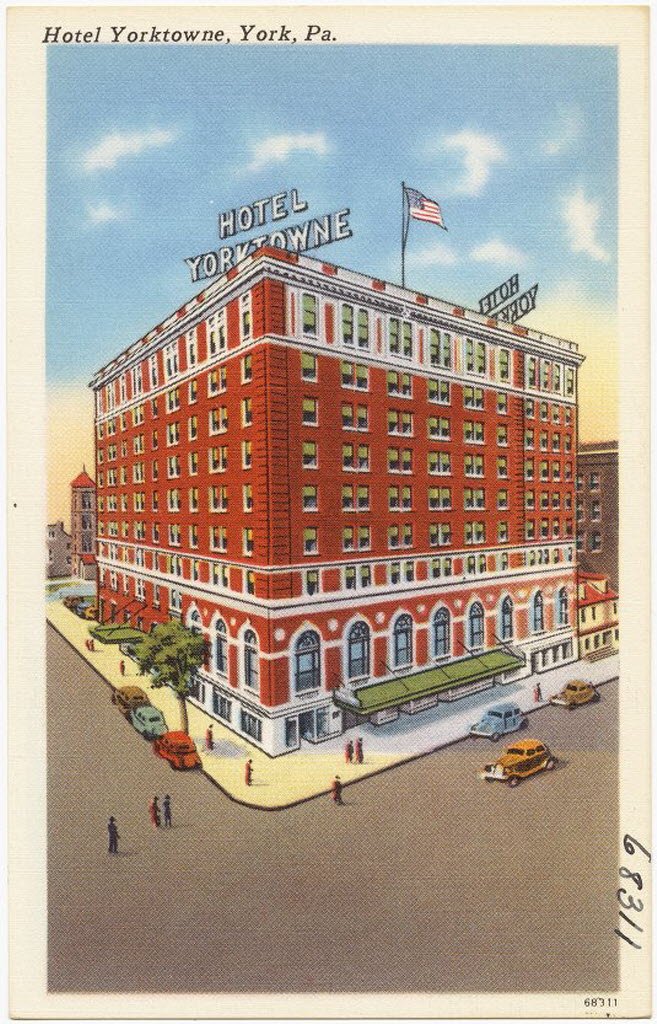 Since 1925, The Yorktowne Hotel has anchored the corner of East Market and South Duke Street. This postcard shows the hotel before 1959, when the courthouse expansion took down the building separating the two.

New owners of the venerable Yorktowne say they will keep the landmark as an operating hotel. See anchor sold.
There can be no better news to York and efforts to revitalize the downtown.
For some, the Yorktowne represents a nostalgic site where famous people have stayed for decades. See Tiny Tim.
For others:
It is the night out of the decade in the Commonwealth Room. It’s the wedding reception venue for an only child. It’s an overnight part of First Night York festivities. It’s the regular meeting place for Rotary or Lions clubs.
It, well, embodies everything that’s good about York.
For Voni Grimes and others in the black community, it represented the pinnacle of success, as he expressed in my November 2006 column:

Voni B. Grimes was born three years before investors launched The Yorktowne Hotel toward its 11-story height.
So as a youngster growing up around York, Grimes viewed the hotel as a towering symbol of achievement, the place to stay in York County.
He still does, and it still is.
But Grimes was aware that touring black performers could not lodge there. They often ended up at Helen Peaco’s place on Cleveland Avenue.
And he couldn’t land a job there, although the hotel employed blacks as bellmen, cooks and elevator operators.
He figured his work application was rejected because “Mr. Russell,” who hired waiters, believed he had the potential for higher education. He couldn’t really move up at the Yorktowne. No blacks could in those days.
The tall building represented a mammoth obstacle for black people to hurdle.
But he would stay at the Yorktowne.
Somehow.
“I’m going to live there someday,” he vowed.
……….
Voni Grimes was searching for help in writing his memoirs. Some people had asked the 83-year-old to put into writing his life of achievement.
Others could learn from his successes, they told him. Indeed, he is filling a line of big footsteps led by the late Dr. George Bowles, the Rev. Thomas E. Montouth and W. Russell Chapman as senior statesmen in the black community.
Grimes had arrived at the crossroads that many reach when encouraged to write about their lives.
Should I write my autobiography?
Some do. Most don’t.
You can.
But how to do it?
Grimes asked the same question.
Just tell your story, I replied. Start at the beginning, in Bamberg, S.C., and work to the present day.
I wrote on a sheet of paper what I knew of his story:
Born in the Bamberg. Came North when he was 4. Grew up in York. Served in World War II. Gained success at Cole Steel and Penn State York. Retired to life of volunteerism, including Lions district governor.
Then his music. What’s next in his life?
And we talked about how his Christian faith would overlay all these steps. And there was that wonderful goal of living in the Yorktowne that would help tie his early and mature years together.
Voni Grimes, always quick with a smile, brightened even more.
It wouldn’t be easy, but he had the key.
He would just tell his story.
……….
A month later, he was doing just that. He writes in longhand — he’s now at 15 pages — and then types that draft into a computer.
Before long, he hit a block. His computer had run out of space.
He would need help to retrieve his work.
Writing memoirs is difficult enough, but then come computer problems.
Will he persist?
……….
Talk to Voni Grimes long enough, and the Yorktowne emerges as a meaningful part of his life’s story.
Written into his memoirs, it also will help his work connect with the story of York, kind of a meta-narrative or story on top of a story.
That larger story shows York and its trademark Yorktowne changing, changing for the better.
Yorktowne officials have sensed what the hotel means to the community.
“It is the center, the soul, and the symbol of the community that built it 70 years ago,” a history published in 1995 states.
The dark side of that soul formerly rejected blacks as guests. Its enlightened side now welcomes them.
Voni Grimes has seen both sides.
The Yorktowne and its community are changing, changing for the better.
……….
Over the course of his postwar life, Grimes invested in rental properties around York.
He had a plan. When he reached 50, he would start divesting of most of them.
But the plan had another part. He would live in the Yorktowne when he reached 75 years old.
At that milestone, he approached Yorktowne’s management about renting there.
The hotel management ushered in Voni and his wife, Lorrayne, through their trademark revolving door.
Voni Grimes had climbed the mountain and settled near its top.
The story doesn’t stop there.
After five years of living his dream in a sixth-floor suite, the press of recreational space for their grandchildren and great-grandchildren caused the Grimeses to seek an apartment with play facilities in suburban York.
“OK, I’ve lived my dream,” he told Lorrayne. “Now, it’s your turn.”