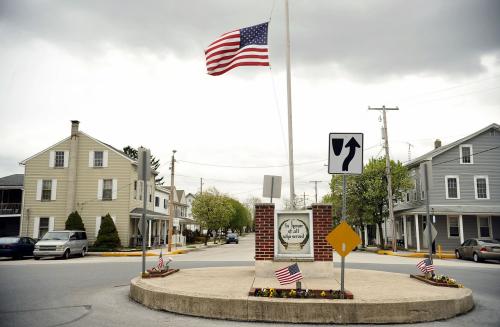 This veterans memorial sits in the traffic circle at Goldsboro’s Broadway and York streets. For more, check out: Goldsboro.

A favorite pastime of mine when I drive through York County towns is to search for the war memorial.
Most towns have them. Some have more than one.

Here are some leads on several such memorials and monuments:

– Red Lion’s monument is one of the largest, perhaps the largest, in towns outside York. Many of its citizens served – and died – in 20th century wars.
– The West York monument is in good condition near the middle and high school campus. It’s noteworthy because it’s in such a high-trafficked area.
– The Yoe monument is right next to the busy intersection near the town’s center. That makes it difficult to keep it clean, but it’s crowded with names.
– Goldsboro’s monument is in the center of its square, one of two in York County to form such an island. (Abbottstown and New Oxford are in Adams County.)
– The other monument resting in the town’s square is the large, grassy park in Jefferson. But the Jefferson memorial is interesting because it marks World War I, unusual in York County.
– Wrightsville has six monuments to veterans in various wars, so allocate some time to take them in.
– Rows of trees are still noticeable along Route 462/30 and the Susquehanna Trail, south of York, planted to commemorate those who served and died in World War I
But back to Hallam.
A York Daily Record/Sunday News story (5/26/08) tells about renovated monument in that eastern York County borough:

For decades, a memorial listing the names of veterans sat at the northwest corner of Hallam’s Market and Prospect streets. In recent years, it was nothing more than a background blur for some residents.
“A lot of people see it, but they don’t pay attention to it,” Hallam resident Tim Senft said. “They’re used to it being there.”
Officials in Hallam and Hellam Township hope local residents will notice it now. The local Veterans of Foreign Wars post and the municipalities on Sunday held a parade and ceremony to celebrate changes to the nearly 64-year-old memorial.
Now, two bronze plaques on the sides of the stone wall list the names of troops from the area who fought in wars after World War II.
“Various factors came together to make this a good time for it,” said borough Mayor Paul McCleary, whose son was listed because of his Air Force service in the Persian Gulf.
The factors? It was the Memorial Day weekend, McCleary said, and Sunday marked the 100th anniversary of the borough’s incorporation.
But the one that pulled the project together was the memory of slain soldier Martin Kondor, he said.
The 20-year-old from Lower Windsor Township, just outside Hellam Township, was killed in Iraq in 2004 when a makeshift bomb exploded near the vehicle that carried him.
Everyone wanted to recognize Kondor, but the monument dedicated to Hallam and Hellam Township-area war heroes was out of room and shielded by glass.
So they were faced with a major question: How does it get done without defacing the memorial?
“That became the challenge. It got to be quite a bit of an undertaking,” father Mike Kondor said.
It was an undertaking that lasted more than two years and was stymied by logistical setbacks.
Deborah Dupler, borough secretary and the project’s chief organizer, said it was delayed by nearly a year because of problems finding a vendor who could make the changes officials wanted.
Another hurdle was finding donations to ease the project’s $17,000 cost.
Countless hours were spent researching local veterans and acquiring the names for the wall, Dupler said.
Event officials said 85 names were added Sunday. Each plaque can hold 240, they said.
To Kondor, the headaches were worth the result.
“It’s absolutely beautiful and extremely meaningful,” he said. “I’m proud my son’s name is associated with all those here.”
Some said the spectacle of the Eastern York School District band marching down Hallam’s Market Street and rifles firing the 21-gun salute could sear the monument’s image in the minds of those who forgot it was there.
“Young people will remember it,” resident David Martin said. “These kinds of things are a big deal. Hallam’s always been a united town.”

Red Lion’s war memorial in Fairmount Park is one of the most noticeable. It has a lot of names to list. For example, it lists 27 Red Lion area residents who lost their lives in World War II and five in World War I.