Othmar Carli: ‘Restoration is much better than selling shoes to make a living’ 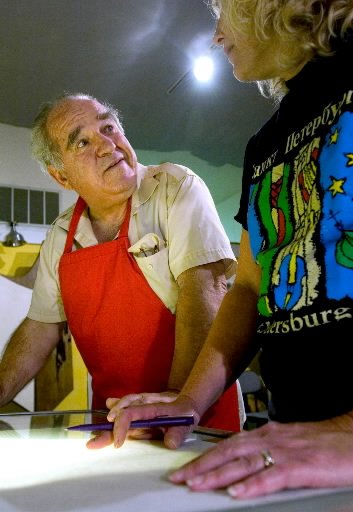 Renowned artisan Othmar Carli, a York, Pa. resident, talks with a student in this York, Pa., Daily Record/Sunday News photograph.Background posts: Women’s Club of York, Pa.: ‘No one knew it really looked like this’  and Artist Jeff Koons came back to York for a show .

Five years ago, he sought to narrow the descriptors after his name by giving up restoration of the works of other people to perform his own art.
This York Daily Record/Sunday News story tells about that transition and about this York resident who is known afar:

It was one of those calm days after Hurricane Agnes tore through, breaking people’s hearts.
Othmar Carli was out walking along the Conewago Creek in East Berlin where he found ruins of houses, cars and even pianos. He looked past it all and picked up a twisted and wavy piece of driftwood. He kept it, knowing someday he’d turn it into art.
Years later, he shaped that piece of wood into an award-winning sculpture of a fish.
Carli, a native of Gratz, Austria, who lives in York, finds beauty in just about anything.
A white-haired man with wiry eyebrows, Carli never stopped creating art. But for nearly 50 years, he put his own creative ideas aside to restore other artists’ works as a way to earn a consistent income while still mastering his art techniques.
Carli, however, now wants to return to life as an artist. He’s getting too old to climb 60-foot scaffolds. He claims the restoration business is more for younger people.
“It’s not for the 300-plus generation,” he said, joking that he has the wisdom of a 300-year-old.
Besides, no one has ever gotten famous from painting over someone else’s work, he said.
And while he has a pretty decent following in Europe, Carli, like most artists, longs to be famous.
That’s why he’s helping 32-year-old L. Alberto Romero of Shrewsbury take over his restoration business.
“At my age, there has to be someone else who follows me,” Carli said.
Romero, a Colombian immigrant, came to the United States in 1995 flat broke with a bunch of dreams.
He had already gotten a master’s degree in fine art conservation at the prestigious Ecole Nationale Superieure des Beaux-Arts in Paris. He had dabbled in acting, writing plays, directing and painting.
He hurried out of Colombia to find peace from a 25-year-old civil war and drug czars ruling the streets.
He was tired of the killings.
He longed for the American dream.
But he lived in a hotel for a week until he found a roommate, and the closest he got to creating art was by working in frame shops.
He soon moved to Pennsylvania, where he was offered conservation jobs for little money. He was getting minimal pay while being asked to teach his bosses how to do the work. After all, he had studied in Paris.
He couldn’t help wondering if the treatment was because he was from another country, because his skin is a little browner than others in the business.
Romero hopped from job to job, searching for a place he’d feel valued.
Eventually he gave up and started working on his own.
After moving to York County, he heard about Carli and gave him a call, telling him about the work he does. After a few conversations, the two met.
A friendship evolved.
For Carli, it was a way out.
For Romero, it was the beginning of another dream. Fulfilling dreams
Carli jokes that he’s thought about spreading a rumor that tells people he’s died, so they will begin to appreciate his art.
In that joke, he moves to an island and watches how his art grows in popularity.
Carli has always wanted to be his own artist.
“But, restoration is much better than selling shoes to make a living,” he said.
His talent in the restoration field took off, taking him to places including Calcutta, India, where he restored a part of a palace built in 1690 that is India’s oldest building. The United Nations honored him for his work on the palace.
But that’s all coming to an end now. He’s found someone to carry on the Carli name.
He has named Romero conservator associate for the Carli International Institute for the Arts. Romero will direct fine art and historical architectural conservation.
The process of handing over all of the work to Romero, married and the father of 2-year-old twins, Alec and Ona, will be slow. In the meantime, Romero, when he’s not watching his twins color his walls with crayons, restores art in his garage-turned- studio. Clients, such as York’s Laurel Fire Company, have helped keep him in business.
Most recently, he restored the fire company’s 1790 charter, as well as a painting of Venice dating back to 1873 that had been hanging in the station’s meeting room.
And the time has come for Carli to focus on Carli, the artist – before it’s too late.
As Romero takes over, Carli will step back, slowly, and allow the claws of inspiration to grab him as they have in the past, such as when he read the Greek mythology story of Daphne, a woman who turned herself into a tree to avoid a man.
Carli created a mashed up face of a woman, which he placed on another piece of wood, creating a sculpture of a woman turning herself into a tree. On that sculpture, Carli, for fun, hung a yo-yo-looking object that had been attached to his body after his open-heart surgery.
He’s created art with a print of a horsefly, and the ups and downs of the stock market by sporadically stamping the back of the Presidential Seal.
And on a plate-cutting machine in his recently acquired art institute – a former church and former library in Elizabethtown – Carli plans to glue porcelain fingers near the sharp blade.
“Why not turn it into a piece of art?” he said.
Carli draws his art from nature – including human nature. He’s inspired by nature, he said.
“Why do a painting about nature when you can take something from nature and create with it?” he said.
That’s why he kept that piece of wood from the Conewago Creek.
“For a long time, I didn’t know what to do with it,” he said.
But he knew it would become something beautiful someday.