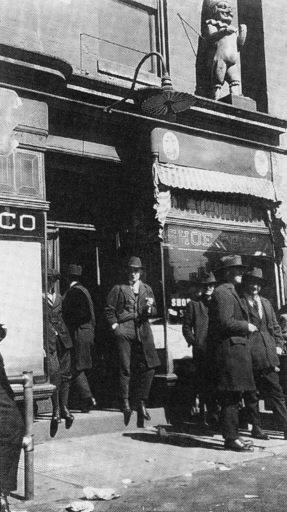 Proprietor Charles H. Seiker, right hand in his pocket, stands in the doorway of Young and Busser’s Cigar Store, Continental Square, circa 1920. That’s store mascot Punch on the ledge. This photo, with accompanying column on the popularity of the cigar store, appears in Jim Hubley’s “Off the Record.” For a color photo of Punch, now in storage in the York County Heritage Trust, check out: Totem. Background posts: YDR columnist James A. Hubley: ‘What I prefer is a simple, Jim’, Kaltreider Library draws name from noted Red Lion cigarmaker and ‘I still have my memories … of the bustling downtown York business district’

Columnist Jim Hubley understood York County.
He knew, for example, that tobacco, cigarmaking and smoking are part of its culture. And he wrote about it.
He wrote in a 1989 column about Continental Square’s Young and Busser’s Cigar Store as a coming together place for York’s men in the 1920s… .

“With the downtown expanding and crowds increasing in the square, Young and Busser’s became the number one spot,” he wrote.
In his last column for the York Daily Record/Sunday News, published May 15, 2008, Hubley again wrote about smoking and his own father, who died at 50, his fingers stained yellow from heavy cigarette smoking.
Hubley noted that he only smoked five cigarettes in his life and quit smoking altogether long ago.
He lived to be 93.
His last column “Good luck weeding out tobacco” follows:

By the time this column appears, a state House Senate committee might have made a decision on a compromise smoking ban for the Commonwealth of Pennsylvania.
An approved decision would enable Pennsylvania to join other states with some type of smoking ban.
It will not be the first or the last of such decisions involving smoking and most likely will not prevent smokers from puffing away — even if banned from certain public places such as restaurants, private clubs or other spots where friends gather to dine, make merry, or enjoy a cigarette, cigar, pipe or even a chew.
American history is loaded with dozens of plans, most of which have failed to stop completely inhaling or just blowing smoke.
Smoking is an American tradition. How it became an American tradition I have no idea.
What I am well aware of is that, from a child on up, I have been surrounded, encircled, enclosed and confined by tobacco from both sides of my family.
When my parents were married, they made their home in a second-floor apartment on West Market Street above a place of business recognized as a cigar store operated by the man who owned the three-story building (now housing York’s Democratic party).
There was another apartment on the third floor, but the rest of the second floor had two rooms in the rear occupied by men and women manufacturing cigars.
During the next two years, there were changes. The cigar-making room on the second floor was converted to an apartment. Those making the cigars were moved to the rear of the first floor, back of the cigar storeroom.
By that time my mother was expecting a child and, in the usual custom in those days, moved to her parents’ home for delivery.
There I was born. We returned to our apartment. And as I grew, gradually I became familiar with my grandparents, particularly my grandfather who almost all the time had a cigar sticking in his mouth — my initial introduction to tobacco.
During his earlier days, he had sold candy produced by his father, then switched to a factory, earned more money, and finally reached his goal and opened a cigar store.
Those grandparents had four children, my father and three girls. As they grew they eased into the tobacco world, all with cigarettes, no cigars or pipes.
That’s only half the story of my relationship with tobacco.
As for the other half, my mother’s parents, their lives were children and tobacco.
They earned their living raising tobacco while having a constant stream of 13 children.
Unfortunately, six of the children did not survive very long. The others, three boys and four girls were involved with tobacco almost as quickly as they could talk.
Tobacco had to be carefully grown, then harvested, cleaned and stripped of middle stems, all to be used in the production of cigars by hand long before there was cigar-making machinery.
Six of the seven children became cigar makers. Two of the boys eventually married. One moved to another state and the other remained in York. Both opened cigar stores.
They became members in a strong cigar-maker’s union, which flourished during those earlier days of the 20th century.
One of the girls, who became my mother, rejected demands to learn how to make cigars. She found work at the Dental Supply company and learned how to make teeth.
She tried a cigarette once while wearing a veil and almost had burns. That was the end of her smoking. My father dropped dead 10 days after his 50th birthday. The fingers with which he always held a cigarette were yellow. He never touched cigars or pipes.
His son smoked only five cigarettes in his life, tried nickel cigars and cheap pipes, but long ago quit smoking forever.
I wish good luck to the House-Senate committee to get its ban approved, but as noted above, tobacco is here forever.
By the way, how is the city doing keeping smoking away from our city parks?
Also of interest
Other York Town Square posts drawing from Jim Hubley or his work:
– ‘We would ‘hex’ them if they ignored us’
– Giving news, sports junkies their fix
– Bury’s burgers: ‘That was it — no slaw, no relish, no pickles’.
– ‘That’s a stupid question;’ Brooksie played second base.
– Butch Wynegar ranks bright among York’s sports stars.
– York County, Pa.’s Cameron Mitchell agonized over career choice
– Playland plays nostalgic note for York countians