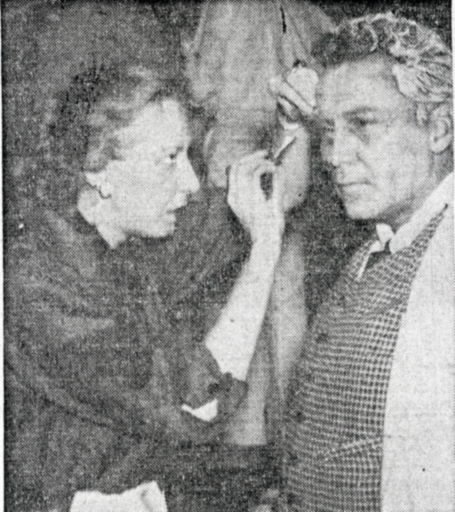 Each Saturday afternoon between May and September, I would man the telephones accepting reports and box scores from games of the nine York County baseball leagues then in operation.
I labored alongside both members of the Gazette’s two-man sports staff, the late Luther A. Kohr, and Eddie Schaeberle, now, like myself, retired from the Daily Record. Since the Gazette did not publish on Sundays, we were the only people working Saturdays and usually were very busy, but there were a few free moments.
Frequently a young ballplaying friend of Kohr’s would join us, not to work but just to talk sports and bat the breeze about a number of other subjects, notably the theater, during those free moments. That’s how I met Cameron Mitchell, or Mitzel, as he then was recognized locally.
It is no secret Mitchell, who passed away recently, was tormenting himself at that time, trying to decide if he should pursue acting or baseball as a career. Mitchell had received offers of tryouts from professional baseball clubs and had received flattering notices when he appeared in local theater productions.
During those bull sessions we felt certain he would follow the theater despite his deep-rooted enthusiasm for baseball. We were correct. He chose the right profession, judging by the facts of his obituary, which traced his acting career from York County to the upper level of stage, screen and television.
Mitchell – the name switch came as a concession to his profession – got his first taste of theatrical praise from York audiences attending the American Legion shows, which were the subject of a column in this space recently. In the 1937 production of “Maryland, My Maryland,” Mitchell was cast in the role of a soldier who had gone mad.
Yorkers Bob and Loretta Witman, who married a year later, were also members of the show’s cast that year. Mrs. Witman remembers the zeal and drive that Mitchell put into his role.
“The show was staged at William Penn High, where the gym was right back of the stage,” she recalls, “and each night about a half hour before he was to appear on stage, Cameron would lie down on the bleachers and work himself up to a real frenzy. It was frightening. But when he was on stage, he was really mad.”
Mitchell’s York appearances lessened as he moved up the ladder, although he did appear in the 1941 Legion show of “Blossom Time.” Following military service and the return to the theater, Mitchell’s visits to York were less frequent.
He hit Broadway with a leading role in the highly successful “Death of a Salesman,” turned to Hollywood and rose to recognition and stardom. Top roles in such films as “They Were Expendable,” “Monkey On My Back,” “Carousel,” and “Love Me Or Leave Me,” which featured Doris Day and James Cagney, gave Mitchell star status.
He conquered television with top-notch roles in numerous productions and hit the tube jackpot with “The High Chaparral” series during its three-year run on NBC. Mitchell last appeared on a local stage as the result of a real-life drama in the true tradition of the “”show must go on.”
The actor made one of his infrequent visits to York to watch his father, the late Rev. C.M. Mitzel, assume the demanding role of Matthew Harrison-Brady in the York Little Theatre production of “Inherit the Wind.” The Rev. Mitzel became ill, too ill to perform.
Cameron jumped in with short notice and, in the perfect ending to such situations, became the “hit” of the show, which had to extend its run with Cameron. Later, during the early 1970s, one of Cameron’s brothers, Carlyle, joined the editorial staff of the Record.
Unfortunately Carlyle developed an illness that was to prove fatal. During the illness, Cameron would telephone us and, remembering our bull sessions of long ago, would speak with me.
Our conversation was mostly of Carlyle’s condition, but we did recall other days. He confessed he was glad he chose the theater but had missed baseball. He was a fine human, a fine actor and a nice guy, proud of his York County heritage.

Other York countians who played on the national stage: