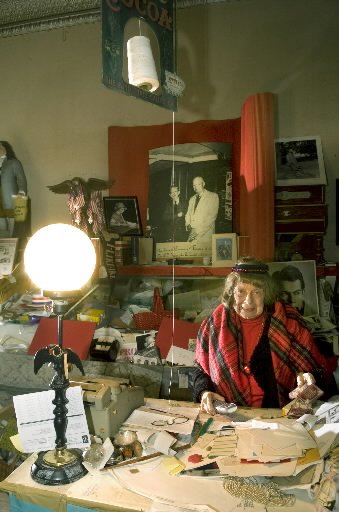 As a Gettysburg resident, Dwight D. Eisenhower was often seen in and around York and Adams counties during post-presidential years.

He played local golf courses and was known to use the York Airport.

A York Daily Record/Sunday News story (12/23/07) stated that Mamie wrote letters to Marion. Mamie gave her friend a mantel clock and matching candelabras. Marion hoped to display these artifacts at the new Harbaugh Thomas Library she helped build in Biglerville.
The entire story on the store, a fixture in Biglerville since the early 1900s, follows:

There’s a story behind nearly every item in the Thomas Bros. Country Store and Museum, and Marion Harbaugh will tell customers every one.
“This is my world,” she said one morning last week as she opened the door to the Biglerville store.
Harbaugh, 83, will tell you she’s run the store her whole life. Her parents, who were teachers, built it in 1909. When they were gone, Marion and her sister Jean took over.
When she was younger, Harbaugh left Biglerville to attend Wilson College, where she majored in English, and graduate school for merchandising at New York University. She liked the city life — boyfriends would take her to ritzy places — but she felt guilty about leaving her family.
So she returned, bringing her city fashion sense with her. The store’s clothing offerings allowed her to keep visiting the city to buy merchandise, she said.
Harbaugh’s sister died four years ago, leaving her on her own to keep the store going.
With her hair neatly curled and held in place with bobby pins, the petite woman takes pride in telling customers about items in the store, which range from antiques to glassware to clothing.
“Have you ever seen…” Harbaugh asks as she introduces pieces.
Whether it’s old-time candy, books, an old sled or a bonnet, every item comes with a history lesson. She proudly points out that the store has things not found at the mall.
It’s a wonder customers get to buy anything.
“I hate to part with things, I love the stuff so,” Harbaugh said.
Many of the antiques are for display, not sale, and there are others she doesn’t even want people to see.
She hides some items in drawers or behind curtains and keeps an eye out for customers who peek. Men try to sneak into an area of antique tools, she said.
“We have to watch them,” she said.
But she can’t sell everything crammed into the four floors of the store. Her goal is to keep history alive.
“We’re trying to preserve the past for the future,” she said.
Harbaugh’s involvement in the Biglerville community stretches beyond the doors of her shop.
Her family donated $80,000 worth of antiques to the National Apple Museum to create a small store.
She and her sister helped start the Biglerville Historical and Preservation Society.
“Marion is a fixture in Biglerville,” Mayor Lori Biesecker said. “Every town needs people like that, that just care enough to serve like that.”
The Harbaugh family donated money to build a new $3 million library in Biglerville. Jim Spertzel, treasurer of the Thomas Harbaugh Foundation established for the project, said Jean and Marion wanted to do something with their money and had no apparent heirs.
They wanted to do something for the town, he said, because “that’s how they made the money.”
Harbaugh is the reason people come to the store, “as much a part of the store as the coffee grinder,” Spertzel said. He also serves on the board of the Thomas Bros.
Country Store Foundation. It will ensure the store is preserved for the future, he said. An application is pending to get the store on the National Register of Historic Places.
But the foundation might not have to take over anytime soon. Retirement doesn’t look like it’s in Harbaugh’s future. In addition to running the store, she’s writing a historical book.
“I just want to live to get my book written and celebrate the 100th year of the store,” she said.