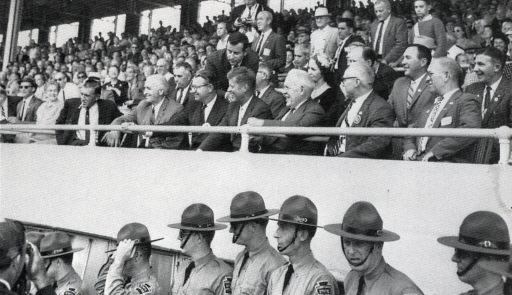 York Fairgoers give presidential candidate John F. Kennedy a warmer reception than York County, Pa., voters in 1960. Richard M. Nixon outpolled Kennedy in the county by 16,000 votes. His younger brother, Ted, is scheduled to appears in York today on behalf of Dem presidential candidate Barack Obama. Background posts: Ted Kennedy’s visit to York comes almost 50 years after JFK’s, U.S. Army Field Band: Live at Farquhar Park and Hillary Clinton’s rally site in York a little odd.
Confronted with an opportunity to buy a brick for the York Salvation Army’s new building, John F. Kennedy reached for his wallet.
As nearby newsmen covering the presidential candidate at the York Fair looked on, the multi-millionaire Kennedy searched his wallet for a $10 bill.
But he found it empty, a common occurrence, according to his aides… .

Miraculously and immediately, $10 immediately appeared from his staff to pay for the brick.
This was one of many incidents reported that day by veteran York County newsman Harry McLaughlin.
Kennedy started his York County visit with lunch at the Lincoln Woods Inn, across from the then-York County Shopping Center in Springettsbury Township.
As he awaited transportation to the fair, he signed autographs – mostly requested by women – and answered reporters’ questions, McLaughlin wrote.
Chaffeur-state trooper Leslie Jackson drove Kennedy to the fairgrounds, as indeed he did throughout Pennsylvania.
“My wife and I attended the Kennedy inaugural ball and we were standing behind the security lines when President kennedy spotted me and broke through the lines to shake hands,” Jackson later told McLaughlin.
After his York Fair gig, Kennedy traveled to Muhlenberg College in Allentown and other Pennsylvania cities.
But he left a tangible legacy in York.
Forty-eight years later, York Salvation Army officers can justly say that John F. Kennedy was a distinguished donor to their building, still standing at East King and South Duke Street.
And here’s a sampling of past York Fair posts:
Teddy Roosevelt at the York Fair: ‘I know York county farmers are prosperous. Their barns are bigger than their houses’.
This York Fair mural is fading from sight .
Good old days at the York Fair were at least old.
JFK received grand applause at York Fair visit.
Young curators produce York Fair exhibit: ‘A Fair of Our Own’.
All’s Fair blog gives all kinds of insight about York Fair.
Both Yanks, Rebs camped at old York Fairgrounds.
‘The lower she sank in her chair’.