Yo, Yoe never was Yohe 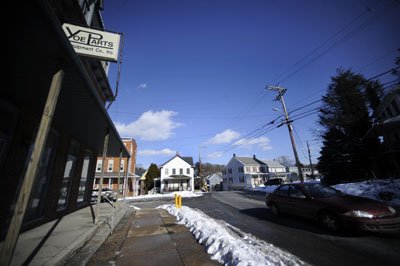 Tiny Yoe is overshadowed by nearby Dallastown and Red Lion. Also of interest: Noted York design firm’s origin: Clair Buchart ‘spread his work out on the living room table of his home in Yoe’ and Yo! More support for Yoe vs. Yohe and York Township’s Springwood Park dance hall: ‘We would pack the place’.

Here’s a different twist about how the Borough of Yoe got its name.
The oft-told story goes like this:
Moses Snyder, a prominent resident of Snyderstown, as the cigar-manufacturing town was called, sought a post office in the 1880s, but another town in the state already claimed the name. Moses chose his late mother’s name “Yohe,” but dropped the “h” to not offend his father’s second wife.
Russell Horn Jr. contests that story… .

Well, part of it.
He has some embroidery from an ancestor, dated 1837, bearing the name “Catherine Yoe.”
That would suggest that the shorter form of the name was around in the 1800s.
So, perhaps this business of offending a former wife may not be true.
Horn’s phone call served as a reminder that his father, Russell Horn Sr., and his two founding partners, Clair and Lester Buchart, all hailed from Yoe and were hometown friends.
Indeed, Clair Buchart opened his architectural firm’s office in Yoe after World War II.
These founders of the York-based international architectural and engineering firm Buchart-Horn/Basco Associates are surely the most noteworthy natives of Yoe in the 20th and 21st centuries. 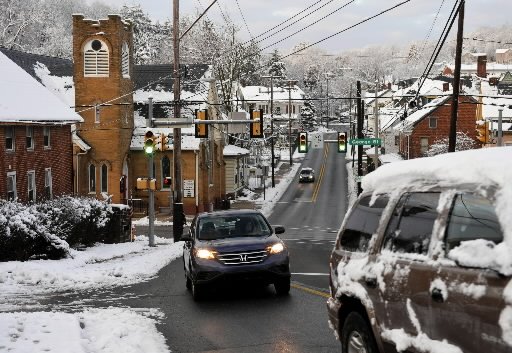 Drivers navigate up Main Street in Yoe on November 2014, the morning after the season’s first snowfall.