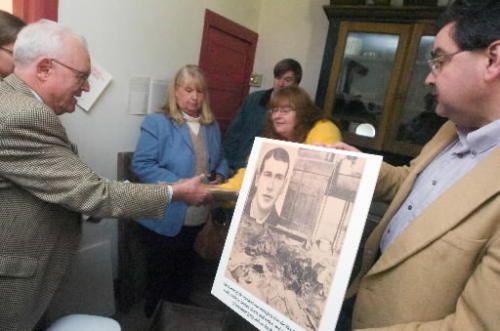 The South Central Pennsylvania Genealogical Society regularly schedules interesting programs. Here, J. Ross McGinnis, author of ‘Trials of Hex,’ talked with members of the society in November as they stand over the spot where three men murdered powwow doctor Nelson Rehmeyer. Jonathan Stayer, at right, holds a copy of a photo of the crime scene. It’s now Stayer’s turn to present at the April 6 meeting of the Society. Background posts: The Hessians of York County, Pa., more than mercenaries and Genealogists find mother lode in York County, Pa.

Jonathan Stayer, head of the reference section at the Pennsylvania State Archives, has developed a program about state land records with a colorful title: “Finding ‘Lydia’s Bottom’ ”
This comes in the aftermath of another Stayer presentation about the wealth of resources offered by the State Archives: “Peeking into Pa.’s attic” … .

Under Stayer’s care, the presentation at the 2:30 p.m., April 6, meeting of the South Central Pennsylvania Genealogical Society will be as interesting as his title.
He will describe the records — applications, land warrants, surveys and land patents — and also demonstrate how to use the indexes and digital copies of these records on the Pennsylvania State Archives Web site.
Stayer has also pointed out the helpfulness to researchers and genealogists of Neal Hively’s warrant and survey files and the warrant maps on file in the library of the York County Heritage Trust.
The South Central Pennsylvania Genealogical Society’s Web site contains a wealth of information for researchers.