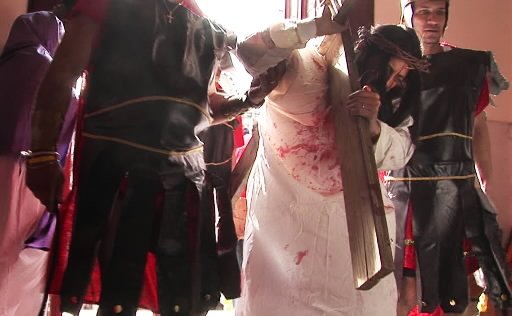 Salvador Cabrera, portraying Jesus, is led by soldiers William Rodriguez, right, and Julio Rivera during a performance of the Stations of the Cross Friday by St. Mary’s Church in York. The annual event is one of scores of Easter celebrations in York County. Background posts: Amish: ‘We are making a commitment to forgive’, ‘Sandpaper Sisters’ rubs readers right way and Retiring pastor: ‘I’ll miss the people’.

Easter has long been widely observed in York County – everything from emotional Stations of the Cross performances, bone-numbing outdoor sunrise services and solemn church altars adorned with sweet-smelling flowers.York County has about 500 houses of worship that celebrate Jesus’ resurrection that day.
It’s a big deal for all kinds of sacred and secular reasons, so for years the York Daily Record/Sunday News has worked hard to be thoughtful in its editorials published on Easter (and Thanksgiving and Christmas).
I’ve had the privilege of writing most of them and am constantly on the lookout for appropriate stories.
My favorite Easter editorial came last year with a piece titled, “Easter moment fired activist’s work.”
That one tied together Easter and slavery – yesterday and today – and human trafficking and reformer William Wilberforce and … .

Well, here it is:

British reformer William Wilberforce traced his conversion to the Christian faith to Easter, 1786.
Historical accounts suggest that crucial moment fueled the passion of this member of the British Parliament to spark monumental societal changes.
The abolition of slavery soon became his life’s work.
As dramatized in the film “Amazing Grace,” he lived to see the slave trade outlawed in 1807 — 200 years ago this year. And just weeks before he died in 1833, Parliament prohibited slavery outright.
Many remember Wilberforce as an example of a leader who stuck to the political knitting instead of withdrawing to pursue the abolition of slavery as a private citizen.
Wilberforce refused to flee the public square or move to its edge.
He stayed anchored in the middle of the political brawl over slavery, fighting the good fight.
Simply put, he engaged the cause as a statesman, and decade by decade, his coalition cut the chains of bondage, link by link.
……….
Christians, in particular, look at him as an example of a man of faith used by God to be a guiding light in a culture that accepted and promoted the bondage of humans.
Writing in the magazine Christianity Today, Gary Haugen raised an apt and penetrating question for Easter day, when Christians observe the selflessness of Jesus.
Are Christians more excited about what Wilberforce did in 1807 than what God wants them to do against slavery in 2007?
That’s right.
Slavery in 2007.
According to Haugen, a member of the United Nations’ team investigating the Rwandan genocide in the 1990s:
More men, women and children are in bondage today than were removed from Africa during centuries of slave trading. More than 25 million people are enslaved in 2007 — in bondage as sex slaves or working mines, plantations and rice mills.
Two hundred years ago, about 50,000 new slaves a year were forced aboard British vessels. Today, the number forced into sex slavery alone far surpasses that number.
York County doesn’t get a pass because the last person to have been a slave here is believed to have died as recently as 1841.
• County voters opposed Abraham Lincoln in two elections and supported presidential candidates who called for a status quo in the slave states.
• For the most part, county voices were quiet in first exposing and then reforming the forces that induced the York City race riots in the late 1960s.
• And federal authorities raided two county spas in 2006, alleging they were part of a sex slavery ring in which Korean women were smuggled into the country and forced into prostitution to pay off travel costs. A purported sex slavery ring in the heart of the county drew little public outcry.
“What a tragedy it would be if amidst all the movies and memorials celebrating the life of Wilberforce in 2007, Christians missed out on the chance to actually be Wilberforce in 2007 — to be used of God to set slaves free, to bring an end to slavery in this generation, and to bring honor to the mission of Christ in the world,” the Harvard- and University of Chicago-educated Haugen wrote.
……….
What can be done?
Haugen suggests several strategies, applicable for people of all faiths or no faith:
• Learn the facts about contemporary slavery and share this information with others.
• Petition lawmakers and others in federal government to make enforcement of anti-slavery laws a priority in countries that deploy forced labor.
• Help pay for legal aid for slaves to secure freedom and other legal protections.
• Help pay for the care and restoration of former slaves.
Such actions against slavery might appear to be tackling a problem remote from York County. But a subset of that institution — racism — is alive and well here.
York County Community Against Racism and the York County Inter-Agency Task Force welcome volunteers in the work to abate hate and confront acts of racism. ……….
This is Easter Sunday, the day Christians observe the life, death and resurrection of Jesus.
Thus, it’s a day that Christians should consider their roles in the world.
It was a day that catalyzed William Wilberforce and his religious and political heirs’ campaigns to end servitude and lighten the oppressor’s hand against child labor, sex trafficking, public lynching, police corruption and violence against women.
Wilberforce’s story should represent more than an inspiration for people to stick to their ministries or vocations in the face of opposition or adversity.
“. . . I imagine it would be quite a disappointment to Wilberforce if we looked past the millions of slaves in our world and found in his life only a metaphor for the zealous pursuit of what we are already doing,” Haugen wrote. “May we not only rediscover the story of Wilberforce, but also the joy of living it.”

And here’s is this year’s editorial published today, “Stories of selflessness and sacrifice:”

A Navy SEAL was part of a team to free hostages in an unforgiving location.
A copter flew the team in, and the special ops force made its way to the compound where the hostages were held for months.
The force stormed into a room — a dark and filthy room. The hostages were curled in a corner.
The rescuers stood at the door, barking to them: We’re Americans. Follow us.
The terrified hostages didn’t budge.
They sat there. Fearful. Not believing the Americans were, well, Americans.
The rescuers paused. They could not possibly carry all the hostages to safety.
The Navy SEAL had a thought.
He laid down his gun and his helmet. He curled up next to the hostages, so close his body touched some of them.
He was one of them, unlike those enemy guards who had watched over the captives for so long.
“Will you follow us?” he asked.
He stood up, and so did the hostages.
One
after
another.
* * *
In a sense, this adaptation from Don Miller’s book “Blue Like Jazz” is a story of bravery and sacrifice.
It may be read as a literal account and illustrates the dedication our military men and women have to their assignments. It’s particularly important to remember this dedication today — Easter — when so many men and women in uniform are away from their loved ones and churches.
It also could illustrate a Christmas story, showing Jesus coming to Earth, as Christians believe, to live among men and women to save mankind.
“I liked the idea of Jesus becoming man, so that we would be able to trust him,” Miller wrote, “and I like that he healed people and loved them and cared deeply about how people were feeling.”
The author ends his account, which may have been based on a true story, with the hostages safely on an aircraft carrier.
So, we’ll take literary liberty here to fill in how they ended up on the flat top.
* * *
Outside the compound in the wilderness, one hostage shrieked. The unknowns of their escape ate at his resolve.
Then another cried out.
And another.
They became more reluctant to follow their rescuers, and their terror and cries increased as they stumbled through the dark.
Their cries alerted their captors, who set out after them.
But the pursuers ran into the Navy SEAL, fighting as rear guard.
Alone.
The SEAL stood firm, a buffer between the captives and captors.
He motioned the hostages toward safety, while holding off the assault.
The enemy’s relentless fire overwhelmed the SEAL.
He was hit in the head.
Nailed in the feet and hands.
He fell.
An enemy bayonet thrust into his side. Just to make sure.
After a three-day journey, hostages made it safely to the aircraft carrier. The SEAL had sacrificed his life for their liberty, at least that was the discussion among the group.
Walking on the flat deck, they cried in surprise.
The SEAL was walking beside them.
The SEAL — given up for dead.
But alive.
A miracle.
* * *
In a sense, this fictional ending concludes a believable story of military bravery and sacrifice. Such heroism probably happens more than we’ll ever know.
It also could illustrate an Easter story showing, as Christians believe, the death and resurrection of Jesus.

For additional posts on the important topic of religion in York County, see this blog’s God and York Countycategory.