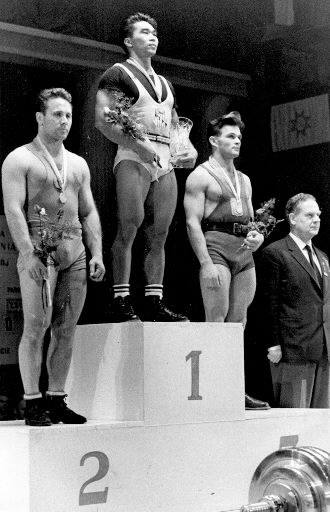 Tommy Kono, center, was America’s best weight lifter in the 1950s. He won eight world titles and went undefeated from 1952-59. Kono lifted for York Barbell, the answer to a quiz question below. Background posts: 20 questions and answers to prove your York County smarts, Part I, A short test of your women’s history knowledge , A short test of your York black history knowledge, Part I, Black history quiz, Part II.

The York Daily Record used this quiz in the mid-1990s to orient new employees. The questions and answers, some tongue in check and often tied into then-recent news stories, will continue to pique interest.
Some may seem easy to veteran York Town Square readers. Consider this a review. Others will seem arcane.
See how you do:

County people
1 What York native became a four-star general, playing a major role in Hitler’s defeat in World War II?
2. Who built the Shoe House beside Route 30 in Hellam Township?
3 What York County native served as governor of Pennsylvania?
4. Who was York’s only signer of the Declaration of Independence?
5. Who led the county’s female suffrage movement about 80 years ago?
6. For whom was Dillsburg named?
7. Which two men petitioned William Penn for a charter for York?
County history
8. When did York become a city?
9. When was York County created and what county was its parent?
10. Which Indian tribe lived in York County when the European settlers arrived here?
11. Which U.S presidents visited in the 20th century visited York County?
12. For whom was Dallastown named?
13. How many times was the bridge between Wrightsville and Columbia destroyed and rebuilt?
14. What was Pershing Avenue’s former name?
15. When did Adams County separate from York County?
16. How did the Delta-area’s Castle Fin get its name?
Made in York
17. If you gave a party, you could serve several snacks produced in York County. Of the following items, which is not made or grown by at least one business or farmer in York County: Pretzels, potato chips, apples, strawberries, cookies, caramels, chocolate-covered cherries, ice cream, wine, and beer. (See this blog’s Made in York category.
18. At the request of Arnold Schwarzenegger, which York County company sent nearly 15,000 pounds of exercise equipment to bored U.S. troops stationed in the Persian Gulf a couple of months before Operation Desert Storm?
19. When did Hershey Foods buy the rights to make the York Peppermint Pattie?
20. Which variety of apple was developed in York County?

Answers to York quiz
1. York native Jacob Devers became a four-star general and helped liberate several French cities in World War II.
2. Mahlon C. Haines built the Haines Shoe House in 1949.
3. George Leader was governor from 1955-1959.
4. James Smith James Smith, a native of Ireland, was York’s only signer of the Declaration of Independence.
5. Anna Dill Gamble was the York County chairwoman of the Woman Suffrage movement.
6. Matthew Dill, an Irishman who settled there around 1740.
7. Baltzer Spangler and Ulrick Wisler petitioned William Penn for a charter.
8. York became a city in 1887.
9. York withdrew from Lancaster County in 1749. Lancaster earlier has been erected from part of Chester County, one of the original Pennsylvania counties. Philadelphia and Bucks were the other original counties in the state. York County was the fifth to be formed in the state.
10. The Susquehannocks lived in York County between 1600 and 1700.
11. Theodore Roosevelt, Harry Truman, Dwight D. Eisenhower, Lyndon Johnson, Richard Nixon, and Ronald Reagan and Bill Clinton visited York during their presidential terms. Several, including John Kennedy, Jimmy Carter, George Bush and Clinton, visited while campaigning. (See presidential stops category for additional information on visits.)
12. Dallastown was named for George M. Dallas, James Polk’s vice president.
13. The first bridge at Wrightsville fell victim to a flood in 1832, Union troops in 1863, and a cyclone or hurricane in 1896. It was rebuilt after each disaster. It was dismantled in the 1960s for scrap and its bridge-less supports cross the river today.
14. Pershing Avenue used to be called Water Street.
15. Adams and York counties separated in 1800.
16. Robert Coleman, an iron manufacturer who once owned the iron forge there, was born in Castle Finn, County Donegal, Ireland. The area was named to honor him.
17. All of those items are manufactured by at least one farmer or business in York County.
18. York Barbell, sponsor of Tommy Kono, contributed barbells, bars, benches and weights to Schwarzenegger’s “Project Fit Lift.”
19. Hershey Foods Hershey Foods bought the company in August 1988.
20. Jonathan Jessop developed the York Imperial apple in York County.