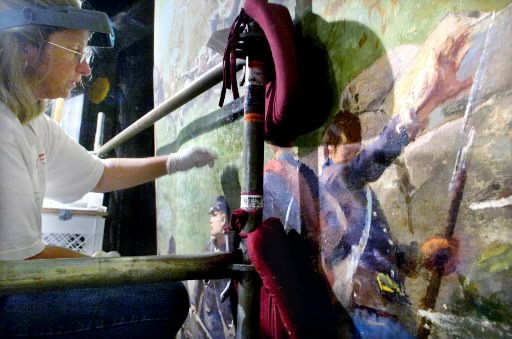 An art restorationist works on the Gettysburg Cyclorama painting, part of the new Gettysburg National Military Park Visitor Center and Museum. The cyclorama is scheduled to reopen in the fall, and the new visitors center in April. (See related photo below.) Update, 9/15/15: Both opened in a timely fashion. Background posts: Gettysburg Cyclorama gets fist full of funds and Gettysburg Cyclorama, with new shape, set for Sept. display.

The opening of the Gettysburg National Military Park Visitor Center is on schedule to open April 14.
Fundraisers have garnered enough donations to cover the Baltimore Pike center’s construction and cyclorama restoration costs, Gettysburg Foundation officials said this week.
The balance of the $125 million to be raised will go to endowments and battlefield restoration.
Here are some facts about the new center, according to an article in the York Daily Record (2/23/08) and Hanover Evening Sun: 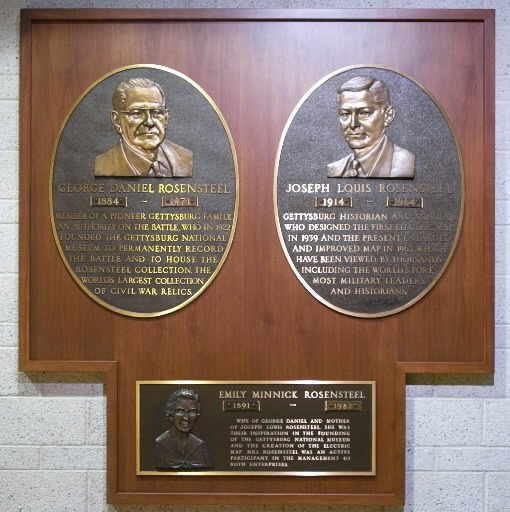 Plaques honoring the Rosensteel family will hang in a research room at the new museum and visitor center being built at Gettysburg National Military Park. Restored Gettysburg Cyclorama arriving in new home and Did you know this about York/Adams history?
Original projected center cost: $40 million. (A broader scope and higher costs moved the needle to $125 million.)

Located in the center: snack bar, historical record archive, collections storage area, two theaters to show a 22-minute film about the battle.
The center’s museum: a dozen rooms and more than nine interactive exhibits.
Museum topics: Casualties of war and the emancipation of slaves.
Outside: Exhibits in two areas outside the museum.
ONLINE
For more about the park, go to www.gettysburgfoundation.org .