Readers can view best of Bil Bowden’s photos on blog 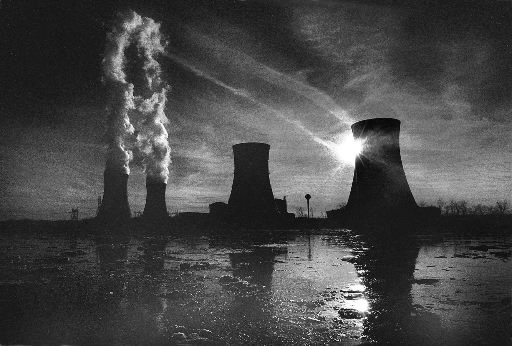 This 1979 photo of Three Mile Island shows steam rising from the unit that was damaged two weeks later by a near meltdown. Today, the steam plumes are reversed. The damaged unit’s stacks sit silent. This iconic picture was taken by veteran photographer ( but new blogger) Bil Bowden soon after he started at the York Daily Record/Sunday News. For a warmup, see Bowden photos on this blog, York Town Square: A far different view of York County, Simple photograph helps frame York County and No light at the end of this (abandoned) turnpike tunnel.

For years, York Daily Record/Sunday News readers have enjoyed Bil Bowden’s photographs.
Now, his blog Bil’s Eye-View, part of the yorkblog.com suite of bloggers, will feature some of his best hit photos from almost three decades of shooting in York County and beyond.. .

He’ll also gives descriptions about how he did what he did and why.
His blog’s description sums up his effort blog’s goal:

“Photographer Bil Bowden shares some of the photos he’s taken during his 29 years in York County. Hopefully they’ll make you smile and think.”

Not only have Bil’s photos become icons, but history is already remembering Bil as an icon himself, someone’s whose body of work publicly documents York County in the late 20th and early 21st century in the way that Lewis Miller and William Wagner did in the 19th century.
(Another talented York Daily Record/Sunday News photographer blogs regularly – on topics involving the environment. See Paul Kuehnel’s posts at www.yorkblog.com/greenmesh greenmesh.com.)