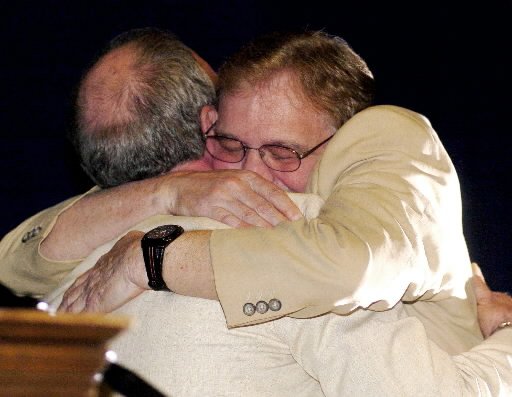 Dave Bupp, right, and Buddy King, members of the homegrown soul band The Magnificent Men, are shown at their induction into the William Penn High School Hall of Fame in 2006. Bupp graduated in 1960, and King, in 1965. A trailer for a documentary on the group can be viewed below. Background posts: Memories about ‘The Oaks’ pile up and Del-Chords continue to jar memories.
Last post, we focused on the fact that anything about one-room schools causes local folks to want to know more.
An equally fascinating topic – perhaps for a different generation – are the lives and times of the York rock group The Magnicent Men… .

A previous post Soul group Magnificent Men come to age on big screen discussed their work on a documentary “This Magnificent Moment”.
A group spokesman told York Daily Record/Sunday News reporter Erin McCracken that the documentary is progressing, as funds are raised.
Footage continues to be collected, and there’s a lot that wasn’t on the trailer. For example, an early-November 2007 concert was filmed and will be part of the documentary.
The bottom line: No complete date is yet set, but work is going slowly but steadily.
(Join in a discussion on the Magnificent Men at exchange.)