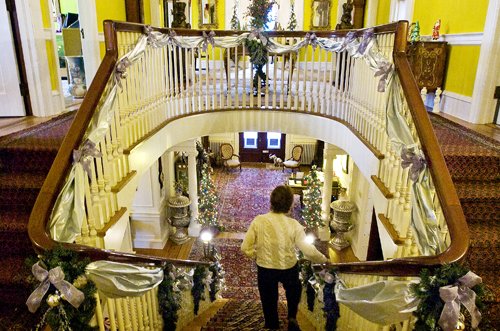 The staircase in the Hanover, Pa.’s, Warehime-Myers Mansion is the first thing visitors see in entering this downtown landmark. Notice the Oriental rugs and mahogany stairway. Background posts: Why is Hanover Country Club in Abbottstown? and Wiki profiles eight with national status bearing Hanover roots.
Hanover Shoe Co., the venerable maker of footware since 1899, actually opened their first retail store in York.
H.D. Sheppard and C.N. Myers started Hanover Shoe Co. with the notion that they would make footwear and then market it through their own retail stores… .

The Hanover men opened their first retail outlet in York in 1900, and became a national name after that.
Today, Hanover Shoes aren’t made in Hanover. The company consolidated operations in West Virginia in 1996.
But Harper Sheppard and Clinton Myers left their look-alike mansions in Hanover’s downtown to good purpose. Sheppard’s mansion is operating as a bed and breakfast. The late J. William Warehime purchased the Myers mansion in 1997, the Hanover Area Historical Society recently reported that Warehime donated the home to the society in October 2007.
A story in the October 2007 issue of “Spaces,” a magazine published by the York Daily Record/Sunday News follows:

The Sheppard Mansion on Frederick and South Franklin streets in
Hanover strikes an imposing silhouette.
The formal landscaping, massive stone columns, and expansive front
porch provide a stoic welcome to diners and travelers.
Inside the heavy, double wooden doors, however, owner Kathryn Hoar
presents a softer, more elegant side of the restored 1913 mansion.
Hoar started renovations of the 12,000-square-foot classic home in
1998. It now serves as a nine-room bed and breakfast with fine dining
Wednesday through Sunday evenings under Executive Chef Andrew Little.
From 1960 until 1998, the stately mansion was unoccupied, but still
maintained.
This lengthy break in occupancy offered great benefits when it came
time to start the restoration of the mansion.
“We were lucky because the building was its own time capsule,” Hoar
said.
“Everything that was here in the ’50s was still here — original
furnishings, bed curtains. We could even see the patterns and colors
they chose. It was like having mini-archaeological snapshots to guide
us.”
Another thing in Hoar’s favor was the personality of her great-
grandmother.
“Grandma didn’t throw anything out,” Hoar said. “She wrapped
everything in brown paper, tied it with string, and put it in the
attic.”
That’s where Hoar found items like the original curtains for the
dining room or the early architectural drawing of the home.
Her goal was to keep the historical integrity of her family’s home
during the restoration.
“We looked for clever ways to hide things like the air-conditioning
vents so we could integrate the technology and still preserve the
historical aspect,” she said.
Working through Historic York, a nonprofit preservation organization
serving York County, Hoar was able to claim certain exceptions to
building standards during renovation due to the historic nature of
the home, but the home still needed a few major changes.
She hired Cox Evans Architects from Lancaster for the renovations,
which included plans for an additional stairway from the second to
the third floor, fire safety precautions and new wiring.
Other technological conveniences, such as cable television and data
ports, were also added.
The kitchen was remodeled when the restaurant opened last year.
Overall, however, Hoar said most of the renovations were cosmetic to
give the home an early 20th-century feel.
The Sheppard Mansion is at 117 Frederick St. in Hanover. Dinner is
served Wednesday through Saturday, starting at 5:30 p.m. For lodging
and dining information, call 633-8075 or visit www.sheppardmansion.com.