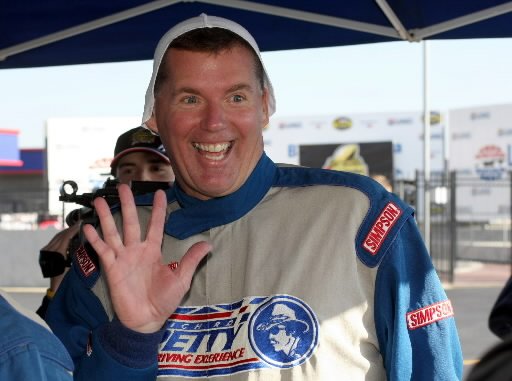 Connecticut head coach Randy Edsall awaits his helmet before riding in a NASCAR race car at the Richard Petty Driving Experience before taking laps at the Lowe’s Motor Speedway in Concord, N.C. in this Associated Press photograph. Edsall and his brother, Duke, a former Atlantic Coast Conference basketball referee, graduated from Susquehannock High School. Background posts about other York sports achievers: Butch Wynegar ranks bright among York’s sports stars and Lenny Moore has strong links to York.
Two brothers from Glen Rock have made it big on the national sports scene.
Duke Edsall has called 20 NCAA tournaments, including one Final Four, as a basketball referee.
His younger brother and fellow Susquehannock High School grad has just coached University of Connecticut’s football team to its best Division I season. (Update: Randy is now the University of Maryland’s head football coach.)
There just seems to be no end to people with York County roots making national headlines … . 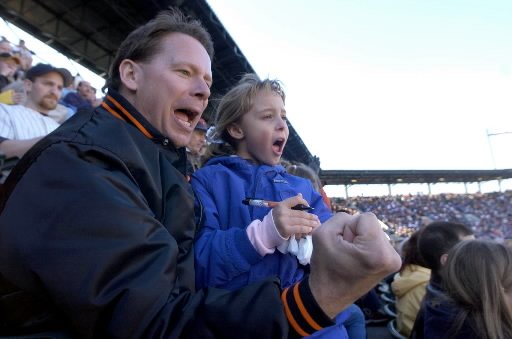 Glen Rock native Duke Edsall cheers with daughter, Kacy, in this 2004 YDR photograph.
An Associated Press story (12/27/07) explores the relationship between the siblings – one known to yell at referees and the other one of the top officials in the country:

When Randy Edsall coaches Connecticut in the Meineke Bowl against Wake Forest, he’ll be the second best-known Edsall in these basketball-crazy parts.
His older brother, Duke, spent 25 years as an Atlantic Coast Conference basketball referee before switching leagues last year. He’s called 20 NCAA tournaments, including the 2002 Final Four, and probably has managed to infuriate fans from every school along the way.
“If I were a basketball coach, he’d be throwing me out because I’d be all over him,” Randy Edsall joked this week. “They miss so many calls.”
Yet Duke Edsall can thank his younger brother for getting into officiating. Because if not for his ill-advised pass 33 years ago, it may never have happened.
The Edsalls grew up in Glen Rock. In 1974, Duke, 18 months older, was two weeks away from trying out for the basketball team at Division III York College when he went to Susquehannock High School to work out.
Randy Edsall was a junior in high school there and the budding quarterback wanted Duke to run patterns for him after practice. Looking to stay in shape, he agreed.
“I happen to run a post pattern in this one instance,” Duke Edsall recalled in a phone interview this week. “I caught the pass and ran into the goal post – and these were the days before padding on the goal post.”
He got up, yelled some obscenities, and looked down and saw his leg bloodied.
“I had a gash across my knee, probably an inch and a half, two inches long,” he said. “My kneecap was exposed, so they got me up and we wrapped it and we got to the doctor’s and they stitched it up. Thank God, there was nothing torn and anything broken.”
Randy Edsall acknowledged he put the pass too close to the goal post.
“He did some things to me when I was younger, so that was my way of getting back at him,” he joked.
The injury meant Duke Edsall wasn’t going to be able to try out for the basketball team. A referee who had worked his high school games found out, and asked if he’d be interested in officiating. Not sure how he’d fill his free time, he jumped at the chance.
After working a few scrimmages, he was hooked.
“I remember making a walk call on a pretty good player up in our area and one of the older officials came over to me and said, ‘Kid, I think you’re going to make it,'” Edsall recalled.
The 50-year-old is still going strong today. The Roanoke, Va., resident now primarily works Big 12 and Conference USA games.
Two years after sending his brother into the goal post, Randy Edsall landed at Syracuse, where he hoped to be the starting quarterback.
“He was only a freshman and I was already planning my trip to New York for the Heisman Trophy dinner,” Duke Edsall joked. “I’ve always been his biggest fan, even though he’s younger than me. We were basically inseparable growing up.”
There would be no stardom as a player for Randy Edsall. Syracuse changed its offense after he got there and he played little.
Edsall started to think about coaching. He began as a graduate assistant with the Orange, eventually moved to the NFL and now is in his ninth season at UConn, where the 49-year-old led the Huskies (9-3) to their best season since moving up from what used to be called Division I-AA.
“Once you could tell he wasn’t going to play at whole lot at Syracuse, he always had a head for the game,” Duke Edsall said. “He was always a smart player. I figured coaching would what he would eventually get into, because he had that demeanor and that mentality.”
The two talk weekly, discussing everything from Duke’s so-called blown calls to Randy’s theatrics with the officials. And don’t think because his brother is an official that Randy Edsall takes it easy on the men in stripes.
“If they miss one, or I think they miss one, I’m going to let them know it,” he said, laughing. “It’s just that competitive nature in you. That doesn’t affect me whatsoever. I’m not nicer to them because my brother is an official.”
Thanks to a change in his referee schedule, Duke Edsall will be at Bank of America Stadium on Saturday to watch his brother. Playing nearby Wake Forest, UConn won’t have the fan support.
As a referee, Duke Edsall should feel right at home.
“They have a tough job,” Randy Edsall said. “I have a lot of respect for him for what he does.”