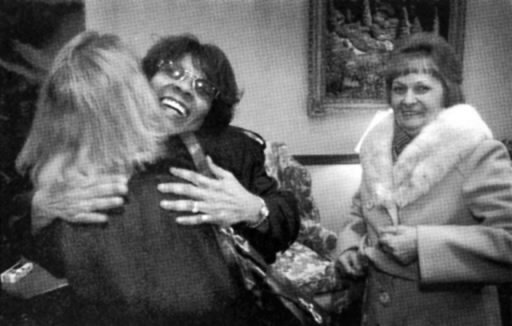 Hattie Dickson, facing, hugs Sharon Howe, while Sonja Gilmore, right, looks on during a meeting at the African-American Love Feast in early 2002. Dickson was a sister of Lillie Belle Allen, killed in the 1969 race riots. Gilmore was the wife of York Police Officer Henry C. Schaad, the second riot victim. Howe is Schaad’s and Gilmore’s daughter. This was the first public meeting of the families, who had met privately a month earlier. Background posts: School violence struck York County in 1970 and First pitch could break link with York race riots.

In a recent York Sunday News column, I applauded efforts to arrive at a community consensus over a “Healing York” memorial.
I contrasted that to a moment in 1970, a time of community coming together called the York Charrette, in which York’s elected officials belated and reluctantly participated… . 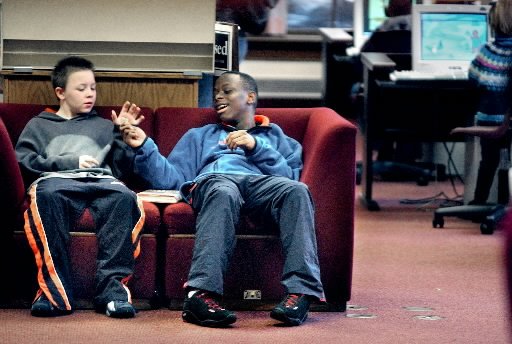 Twenty-four hours after a white supremacist leader spoke at Martin Library in January 2002, two friends hang out at the library during its Family Festival for Unity. The library had closed the day of the speech because of security concerns. It was normally closed Sundays, but library officials put on the unity event to help the city move past the previous day’s demonstrations by white supremacists and counter-protesters.
We ran three York Daily Record/Sunday News photographs with the column to illustrate three snapshots of community unity with the lead-in:

“Just as with sculptures, images expansive enough to serve as poignant reminders of past racial injustices and to provide hope for future harmony are, in the lingo of photographers, difficult to make. Here are three moving photographs from York Daily Record/Sunday News files that might spark such contemplation.”

Two of those photos accompany this blog and the third can be found at: Holocaust sculpture a York County must-see.
I also wrote a brief accompanying article assessing the performance of York’s mayors on handling race issues, headlined “Decades of discord.”

Racial discord in York County is a complex issue that goes back decades.
And since 1962, three of York’s seven elected mayors – John Snyder, Eli Eichelberger and Charlie Robertson – have fumbled or stumbled over, in full or in part, the handling of race issues.

That’s not a great batting average.