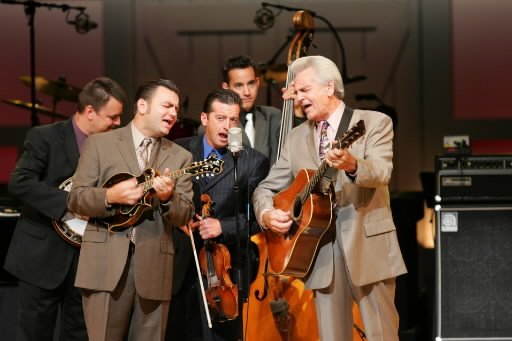 The Del McCoury Band — led by county native Del McCoury, right — brought bluegrass to The Strand-Capitol last New Year’s Eve. “Del McCoury doesn’t consider himself hip, but just about everyone who’s ever heard a bluegrass tune seems to think otherwise. McCoury admits, however, that he does think it’s important to look snazzy on stage,” a York Daily Record photo caption stated in promoting the performance.The band will be playing in York in early 2008 at the York County Chamber Annual Inaugural Ball. Background posts: Roy Rogers took York County stage but not alone and Story on famed 101 Ranch Boys spawns memories.
A yorktownsquare.com reader pointed out that in my lists of national arts and entertainment giants hailing from York County, I hadn’t mentioned the Del McCoury Band. I actually included the band in a post of national performers from York County, but haven’t focused on this celebrated bluegrass band.
McCoury, who says he was born on the family farm in the Pidgeon Hills, has been at it for years and keeps getting better.
The York Daily Record said this about McCoury in a 2006 story:

To those who fear their better years are behind them, fear not. Del McCoury had one of his best during his 67th year on this planet. In February, The Del McCoury Band won its first Grammy for Best Bluegrass Album for “The Company We Keep.” In June, McCoury and his band released “The Promised Land,” the group’s first stab at an all-out gospel record that was just nominated for another Grammy… .
We talked with Del about his hip image in the world of bluegrass, what it was like win a Grammy and his goals for 2007:
Some places have given you the accolade of helping bluegrass music become more “hip.” Have you ever considered yourself a hip person? Not really. . . . As far as the look we have on stage, I’ve always had that since the first time we played music. I’ve never changed anything. If you get in front of an audience, you should look the best you can. What people see is half of it. I think you should look neat. Some of the work I did was some of the dirtiest in the world. I used to work in the woods and cut trees and do all that. But then the music is the complete opposite.
What was it like taking home your first Grammy this year? That was kind of a surprise. We’ve been up six times I think, and I was like, “Well, we probably won’t win this time either.”
If your album hadn’t won, who’s should have? I can’t remember the nominees anymore. If Alison (Krauss) is nominated, you might as well hang it up. And I don’t think she was this year, but I had some pretty stiff competition. But I think Alison won a country Grammy.
A lot of musicians look to you as an inspiration and hero. What is it that you would want someone to take from you and your career? Probably what it would be is to follow your heart. Do what you like to do and what you know you can do and don’t let anyone persuade you into doing anything else.
If you could share the stage with any band or artist, who would it be and why? It might be Merle Haggard. He’s a great singer. He called and wanted to do a bluegrass record, and we just recorded (it). He wrote brand new songs for it. He did a few he recorded before. I just let him do whatever he wanted to do. And he’s 70, and he still sounds great. He recorded 12 songs in two days.
What’s your New Year’s resolution? I think if I make one, it’s to lose some weight. Me and my wife were talking recently. When we got married, I had a size 33 waist. Now I’m right about 40. Vince Gill, last night I told him, “Vince, you’re falling away to nothing. You’re getting plum skinny.” He loves to eat. Of course, I do, too.