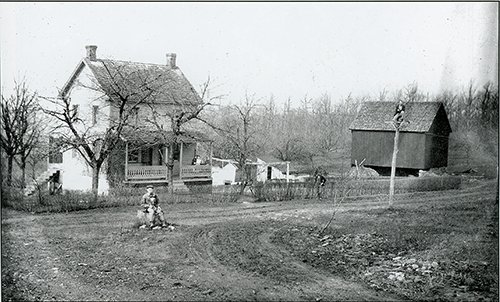 The Samuel Runkle house is shown in this photo from the new publication “Yesteryears in Southern York County.” The caption notes that this photograph shows six people at this Cross Roads homestead. Can you find them? Background posts: Southeastern York County made for Sunday drive and Yesteryears, Part II.

A new book, “Yesteryears in Southern York County,” is well worth its $20 cost.
The pictorial book contains more than 200 photos of life from the past in Fawn Grove, Gatchelville, New Park, Stewartstown, Rinely, Cross Roads and Winterstown.
The photos have a lot to say about yesteryears in those parts … .

And in one case, a picture of Stewartstown Presbyterian Church, it’s what the photo and caption don’t say that is interesting.
The caption – and entire book for that matter – makes no note of Camp Stewartstown , the World War II POW camp located at the community park beside the church.
That camp was a major player in the 20th century in that area, and the book needed to carry on its tradition with at least one photograph. Otherwise, history is lost.
But look to future posts to see a sampling of additional neat photos in “Yesteryears.”
To order, send name, address, number of copies and amount enclosed to Nathalie Clugston, 28 Anderson Ave., New Park. 17352-9345. Or for details, call Clugston at 382-4025. The $20 book includes a $5 handling and postage charge.