Statesman Philip Livingston buried in York: ‘He said his farewells to his family … ‘ 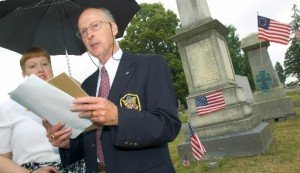 When Continental Congress delegate Philip Livingston died in office in York, he was laid to rest in the German Reformed Church Cemetery, later occupied by Woolworth’s.
Years later, the New York delegate’s body was moved to Prospect Hill Cemetery. Grandson Stephen Van Rensselaer erected a monument that stands today.
Although this once-prominent statesman’s name has largely been lost to history, he is still remembered by his family. Members of this still-prominent family – whose members include the Bush presidents and Eleanor Roosevelt – gather annually at his grave… .

Here’s an account of one such gathering from the York Daily Record, July 6, 2005:

When Philip Livingston was preparing to leave his family in New York state to return to join the Continental Congress in 1778, he had a bad feeling about the trip to York.
“He was not in good shape,” said Melvin Philip Livingston of Endicott, N.Y., one of his descendants. “He felt this was going to happen. He said his farewells to his family because he didn’t think he’d make it back.”
On Tuesday, the day after the nation celebrated its 229th birthday, Livingston and about a dozen other descendants stood at the gravesite of Philip Livingston, one of the signers of the Declaration of Independence. His grave is in Prospect Hill Cemetery in Manchester Township.
The pilgrimage is an annual event. The descendents of Livingston, as well as descendants of other signers of the Declaration, met in Philadelphia during the holiday weekend.
There they took part in celebrations marking the holiday. Three teens — D.J. Scordino, 14, Kristy Scordino, 13, and Jessica Scordino, 13, all of Endicott — were the youngest descendants and took part in several events.
As Tuesday’s gravesite ceremony got under way, a few drops began to fall. By about a third of the way through, the rain was heavy enough to warrant umbrellas. When they wrapped up, it was a torrential downpour.
Melvin Livingston, who had researched the genealogy of the family, read a family history. The signer’s descendants include Eleanor Roosevelt and both Presidents Bush.
Then several family members lifted a small American flag on the grave monument to reveal a new plaque, noting it as a resting place of one of the Declaration’s signers. The teens came forward and laid a wreath.
One of the descendants present was Edward Finch, who served in various diplomatic positions under several presidents, including as Ambassador to Panama under President Richard Nixon.
“The tradition of the Livingston family is to serve,” Finch said. “The Livingstons stand for service to the nation.”
But what would Philip Livingston think about all those folks who stood in a thunderstorm for a ceremony at his grave?
“I got the impression that he was a stubborn guy,” Melvin Livingston said. “He would have approved of that, sticking it out.”

(For the story of York County in the American Revolution, see “Nine Months in York Town,” available at www.yorkheritage.org.)