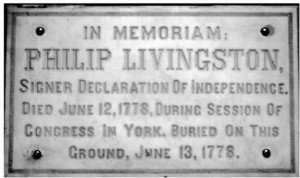 For years, shoppers at Woolworths in York could observe this marble marker. But where did it go? Also of interest: John Adams: ‘Yesterday the greatest question was decided’ and Declaration signer interred in York County.

Zion United Church of Christ, the York church with the ‘stealth’ steeple, plays host to a once-popular York landmark that has blended into obscurity… .

Declaration of Independence signer Philip Livingston came to York late in Congress’ nine-month stay in York in 1777-78. He died in office and was buried in the German Reformed Church’s cemetery on West Market Street.
Later, his body was moved to Prospect Hill Cemetery, where a monument marking the spot can be observed today.
In the early 1900s, the church was razed, and a new building was erected at 100 Lafayette St. – Zion United Church of Christ.
A marker on display for years in the church was left on the wall of the building replacing the church – Woolworth’s.
When the five-and-dime went out of business in 1997, the church claimed the marker, and it is on display today, seen mainly by churchgoers.

The following is a story about the marker, courtesy of former Zion pastor Bob Anderson:

‘Livingston was moved out of our cemetery behind the church when we built an addition on to the church, taking up the space where the cemetery was. Everyone else was moved, too, including B. Spangler, one of the founders of the church and (we’re told) the man who held the survey sticks for the laying out of York. When the church addition was built, they put up the plaque near the spot where Livingston had been buried, and then the plaque was transferred to the east wall of Woolworths when it was built. It was there all the years Woolworths was open for business. When the chain closed, the executives of Woolworths were going to move it to their NY city headquarters, where it would certainly have been lost forever. I petitioned them to let Zion have it back, and had to prove to them that we owned it and had been responsible for having it carved. I remember one day, letter in hand, that I and some members of the church went to reclaim the plaque. That’s why it’s still in York today.’