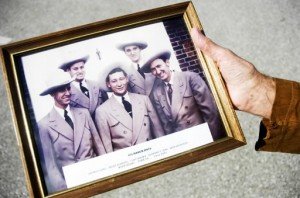 Randy Shaffer of Manchester learned something from a recent York Daily Record story on the nationally known country and western group, the 101 Ranch Boys.
“I never knew that there were local members in the group. Especially people such as Smokey Roberts, mostly known for his underwater filming. I use to work next door to Smokey’s film business and would have loved to pick his brain about the group.”
Randy went on to explain how his grandfather, a meter reader for Edison Light and Power, would become distracted when doing readings at WSBA radio. The radio station then was located along the Susquehanna Trail, just north of York. WSBA’s towers and transmitters are still located in the field beside the old station.
Randy’s grandfather always seemed to be there on live performance days.
“One day when the 101 Ranch Boys were
performing, I guess he was watching a little longer than normal. He was really embarrassed when the announcer said, ‘If the Edison Power Company is missing a Meter Reader, you can find him here in the studio watching the performance.’ The announcer was most likely Wayne Trout.”
Randy also had a question that readers might be able to answer: 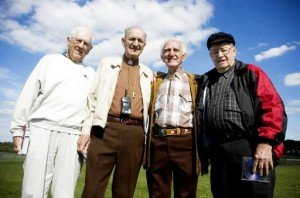 Wayne Trout, left, a former announcer for WSBA radio in York, stands beside the Rev. W.C. ‘Rocky’ Riedel, Leonard Zinn and Smokey Roberts, the three surviving members of the 101 Ranch Boys. Also of interest: Country music’s Shorty Fincher: ‘Valley View is the best of the lot’

“WNOW-TV (CH 49) had a country western style backdrop in their studios. I didn’t see the studios
until the mid-70’s. There wasn’t anyone at the station that knew anything at that point about the
programming. I was wondering if maybe the 101 Ranch Boys performed on the air there. The station
went dark in the late 50’s with the demise of the Dumont Network.
The story on the 101 Randy Boys, written by Erin James of The Evening Sun in Hanover, follows:

Under a picnic pavilion in Hanover on Sunday, three octogenarians proved that youth has nothing to do with creating good music.
For only the second time in more than 50 years, the three musicians performed together as former members of a 1940s-50s country-western music group known as the 101 Ranch Boys.
One of them, 82-year-old Leonard T. Zinn, is a Hanover native, a Hall-of-Fame steel guitarist, and the reason why he and some of his former band mates came together once again at the Zinn family reunion.
Zinn, who now lives in Michigan, said he decided to invite former band mates Smokey Roberts and the Rev. W. C. “Rocky” Riedel to perform at his family reunion last year, and the idea carried through to this year.
Reminded on Sunday that 50 years passed before the first reunion, Zinn gave Roberts a look of disbelief. “It’s not that long, is it?” Zinn said.
The 101 Ranch Boys was a Kansas City-based band with a revolving membership that eventually recorded more than a dozen records. The group once played for President Harry S Truman, Zinn said.
Other members of the band have passed away, but Roberts, 82, and Riedel, 80, both live near Lancaster.
Zinn continues to perform across the country. Last week, he was in St. Louis. In April, he performed in Hawaii.
The three men spent some time Sunday reminiscing about the days spent as traveling musicians.
Unknown to some listeners, the band borrowed its name from a famous ranch in Oklahoma that stretched 110,000 acres, Zinn said.
When they performed, Roberts said the men would carry real guns on stage as part of their costumes, though the ammunition inside was only blanks.
“We used to have shootouts in the back of the (stage),” he said.
Looking at an old photograph of the band, Riedel was taken aback by the props juxtapositioned with country-western instruments.
“You and I got our guns out,” Riedel said to Roberts. “Holy mackerel!”
The band mates were also reunited Sunday with former radio announcer Wayne Trout, who said he often introduced the 101 Ranch Boys during his 18-year stint at WSBA in York.
Gordie Sauble, a former steel guitar student of Zinn’s, performed with the former band mates Sunday and recalled taking lessons from Zinn in Hanover in 1954 when he was 8.
“I’ve played all my life,” he said.
Zinn recalled the names of some of the musicians the 101 Ranch Boys performed alongside at music festivals across the country. One of them was Bill Haley, the lead singer of Bill Haley and His Comets, which produced the hit song “Rock Around the Clock.”
Though the 101 Ranch Boys aren’t as well-known as some of their contemporaries, Roberts said he remembers the experience fondly.
“We didn’t make much money, but we had a lot of fun,” he said.