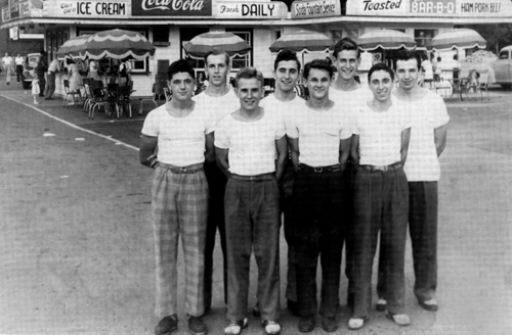 Melvin’s was located on East Market Street before the interstate spelled its demise. Posing in front of the hangout in 1939 are front row, from left, Howard Rohrbaugh, John Brenneman Jr., Al Wildasin and Earl Warner. “York Then and Now,” the source of this photograph, indentifies only three of the four in the back row, Bob Neiman, Bob Givens and Melvin Bond.

When Interstate 83 came through, Melvin’s Ice Cream Bar came down.
Melvin’s is another of those York County icons that immediately evoke memories from those who have lived in York County “a while.”
It was one of the drive-in restaurants that grew up with the popularity of the automobile and sat along main thoroughfares.
This anchor of east York was balanced out in the west by the White Swan, located at 4155 W. Market St.
York Daily Record columnist Jim Hubley, writing in 1996, explored the popularity of places like the White Swan and Melvin’s:

They liked the idea of not getting out of their vehicles to have a bite to eat or a cooling drink while enjoying the closeness and comfort of their dates. The soft custard menu soon expanded.
The White Swan constructed a barbecue pit along the side of its structure and served up delightful ham, beef, chicken and other concoctions. It soon became the “in” place for fun-seekers and hungry mobile Yorkers.
When the New Deal was introduced to fight the Depression, many ideas, some good, some weird, were launched to help produce more jobs for men. Places like the White Swan were targeted because of their use of pretty females to do the serving. This was largely responsible for the success of such places, but some New Dealers hinted drive-ins should hire men instead of pretty girls.
It was a ridiculous idea, except by some quirk I landed a job as a male car hop, a rare American profession. I worked only 10 weeks, just long enough to earn money for a trip to Chicago. The idea of male car hops didn’t last much longer. Before long, attractive young girls again took over, and drive-ins such as the White Swan increased and thrived.
Eventually, York had more than its share, with Melvin’s becoming as popular at a spot east of York, as the White Swan was to the west. The popularity of drive-in restaurants peaked during the 1950s. By the next decade, many had fallen to real estate development or new fads. Melvin’s was swooped up; the White Swan changed hands and expanded to a regular restaurant without car hops.