When the bridge over the Codorus Creek moved 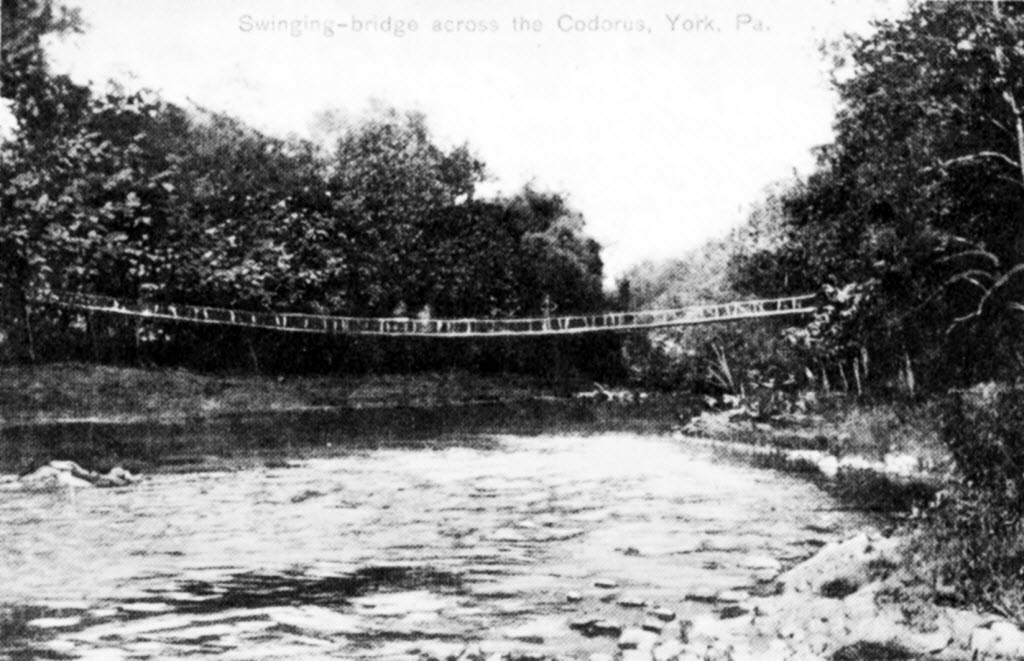 This pedestrian bridge provided a shortcut for North Yorkers walking to York Safe & Lock and other factories on the other side of Codorus Creek. ‘That bridge was way down at the end of the (Small’s) meadow, built, I guess, by the York Safe and Lock Co.,’ Raymond Sechrist wrote in his book “Skinny Dipping in the Codorus”, published by the York County Heritage Trust. Background post: York Safe and Lock faltered after founder’s death.

Games at York’s new baseball stadium are causing people to make the trip from Small Field and North York in greater numbers since the heyday of York Safe & Lock in the first half of the 20th century.
In those days when people walked to work, a pedestrian swinging bridge crossed the Codorus Creek about 3/4 of a mile east of the North George Street Bridge.
Here’s how Raymond Sechrist described the bridge:

“A swinging bridge is just a two foot wide board about wide enough to walk on. There were cables on each side to hold on to as you go across. Another cable was at the top to take the weight. It took a lot of steps out of the walk from North York hill to the York Safe and Lock Co. and York businesses. It was used for many, many years by women and men. When you would get to the middle and somebody would come from the other way, you just had to stand aside and hold the wire and let them squeeze past, before you could continue on. It was something.
“We kids would go up there on that swinging bridge in the summertime and, in between working hours, we’d dive off of the bridge into the creek or we’d make it swing. You couldn’t swing it much, but a little bit. We had great times there at that swinging bridge.”

Such a footbridge – whether swinging or cement – today would similarly shorten the walk from baseball parking at Small Field to the stadium. And its novelty would be another hook for fans to come down to a game.
York County boasts at least one other swinging bridge, sort of. Such a bridge over the Yellow Breeches Creek connects Messiah College’s main campus in Cumberland County with its athletic fields in York County. See also: Picturesque steel bridges going way of covered predecessors.