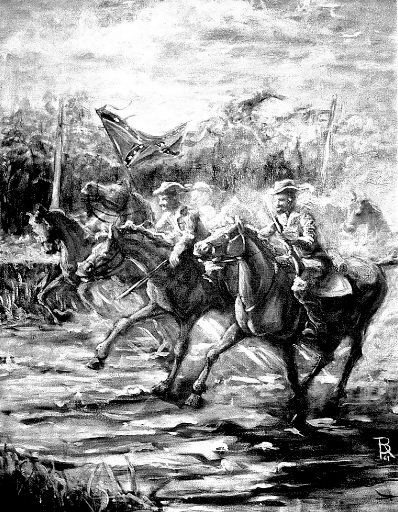 Lige White’s Comanches were in the vanguard of the Confederate invasion of York County in late June 1863. Here, the mounted unit rides in the vicinity of Hanover. In his new blog Cannonball, Scott Mingus will draw on his research about the rebel movement across the southern tier of Pennsylvania to the Susquehanna River. That research will result in book “Flames Beyond Gettysburg: The Gordon Expedition,” due out later this year. (Courtesy, Hanover Public Library.)

In a recent post , I touted Scott Mingus’ new regional Civil War blog, Cannonball.
I wanted to give some for insight into his insight local Civil War matters: …

— Mingus found a new source for the burning the cover bridge between Columbia and Wrightsville. It came from a member of the York Invalids, from the military hospital in York. The unit of soldiers recovery from war wounds fought in the defense of Wrightsville.
Mingus wrote:
“Of particular interest is the following comment, which clears up the apparent dichotomy between the traditional thought that the York Battalion walked to Wrightsville (Cassandra Small account) and the info I dug up that suggested most of the men took the train instead.”

“About 4 P.M. we marched out the pike towards Gettysburg. When four miles out, we returned hurriedly and took the last train to Wrightsville, none too soon, for the mounted infantry of Early’s Corps [French’s 17th Virginia Wildcats] appeared on all the hills and formed a cordon around the town. After an exchange of shots at very long range, we arrived at Wrightsville, opposite Columbia…”

And he found an account of an attempt to mine the bridge to drop a span into the river. This provides more evidence that the bridge was not fired in the middle, although this of course contradicts with some Rebel accounts:

“The bridge was only sawed in two a quarter of a mile from the mouth, but was saturated with oil and combustible material… We lounged around, until the smoke and flames made it a race for life to reach the other end, a mile away…

-Mingus found the following account about Hanover Junction in the Personal Memoirs of John H. Brinton, Major and Surgeon U.S.V., 1861-1865.

“Immediately after the Battle of Gettysburg, I was ordered by the Surgeon-General to go there on special duty. There was, then, two or three days after the fight, some difficulty in reaching Gettysburg from the south, the Washington side. The railroad had been cut in a good many places, and the enemy was retreating across the Maryland line in the direction of the Potomac. There was much delay, and the transportation was rough. I remember going, I think, from Hanover Junction, in the night, in a box-car, in which were one or two horses, untied. I slept in the straw on the floor perfectly safe. It was wonderful to see the instinct of the poor brutes. How careful were they on their feet, and how they seemed to try not to tread on anyone, or injure them with their hoofs… In this box-car going from Hanover Junction, I met my old friend Dr. Ellersbie Wallace, in search of the body of a friend, the husband of a connection of my own, who had been killed in the battle.”-

Good stuff.
For a steady diet, see his blog and his soon-to-be published book.